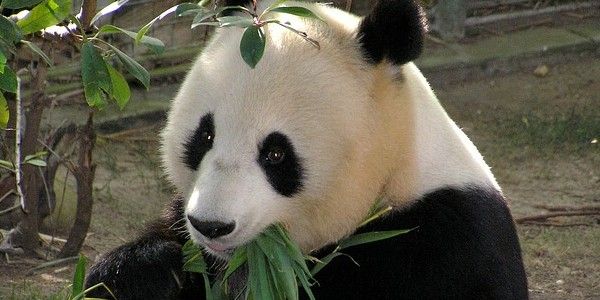 For more than 100 years. scientists have argued over exactly what a panda is. Now. finally, with the help of DNA testing. the panda has been admitted to the ursidae (bear) family. and the spectacled bear of South America has been confirmed as its closest living relative.

In 1869. French Jesuit missionary Pere David first described the giant panda to western science. With just a pelt and reported sighting to go on. he classified it as a bear. However, the following year, zoologist Alphonse Milne Edwards dissected the first specimen and concluded that it had more in common with the red panda, a member of the raccoon family. For more than a century, scientists quarreled over whether the giant panda belonged to the bear family, the raccoon family or a separate family of its own.

They had good reason to be confused. The giant panda shares many physical characteristics with the red panda. Both have evolved to feed on bamboo, grasping and eating it in the same way, with similar teeth skulls and forepaws. They also both have a distinctive cry, which they use to communicate with others in their group.

In the mid-1980s there were several studies involving DNA comparisons between the species. The first investigations linked the giant panda with bears, but in 1991 further tests contradicted these findings and placed it in the raccoon family with the red panda. By the year 2000, approximately twelve studies had been completed, and all except two placed the panda in the bear family. The data from these two studies was reanalysed by other researchers, who finally concluded that the giant panda was indeed a bear.

Today, there are eight species of bear. Along with dogs, their closest relatives, cats, raccoons and weasels, they belong to the order Carnivore, a group of meat -eating predators that evolved some 57 million years ago. The ancestors of modem bears split from this group about 34 million years ago, and today the panda is our oldest living bear. followed by the spectacled bear. Both are survivors of an ancient lineage dating back 18 million years. The rest – the brown, black, polar. Asiatic black, sloth and sun bears – are relatively modern. dating back four to five million years.

Researchers have found that the spectacled bear and the panda have several physical features in common. The spectacled bear’s muzzle is comparatively short and it has blunt molar teeth and large jaw muscles. which are good for grinding fibrous vegetation – vegetation such as bamboo. Indeed, scientists in Venezuela have found that bamboo makes up 70% of the diet of some spectacled bear populations. For most spectacled bears. however, the bromeliad, a tropical plant with fleshy leaves, is their main food source. Most species of bromeliad grow in trees, and spectacled bears therefore have to be adept tree climbers because they spend their lives foraging for these plants, as well as fruits, in the cloud forest of the Andes.

The giant panda’s diet is famously dull, with bamboo representing 99% of its intake. This is rather strange given that its physiology is typical of a carnivore and it has no special adaptation for digesting cellulose, the main constituent of plant cell walls. A panda manages to digest only about 17% of the bamboo it eats (a deer living on grass achieves 80% efficiency). It typically feeds for 14 hours a day, consuming 20 kg or more of bamboo. Unable to store fat effectively, it continues eating in the bitterly cold winter, at a time when many other bears hibernate.

With such a specialized diet, the giant panda has evolved a sixth digit, a prehensile elongated wrist bone called the radial sesamoid. They use this ‘false thumb’ to roll bamboo leaves into fat, cigarshaped wads which they then sever using their powerful jaws. They feed mainly on the ground but are capable of climbing trees as well. The spectacled bear is a more frequent climber and will even climb spiky cacti plants to reach fruit at the top. They also construct tree nests to act as a bed as well as a platform to feed from fruit-laden branches.

Very occasionally, the giant panda supplements its diet with meat, which it scavenges. Spectacled bears eat carrion, too, and some have been known to kill small calves. Spectacled bears are highly adaptable and are found in a wide range of habitats including rainforest, dry forest and coastal scrub desert. In contrast, the giant panda’) live at an altitude of between 1,200 and 3,500 metres in mountain forests that are characterized by dense strands of bamboo.

There have been many theories as to why the panda has such a distinctive coat, but the most convincing argument is that of George Schaller, one of the first western scientists to study wild pandas. He believes the contrasting coat may help prevent close encounters with other pandas. ‘In pandas, a stare is a threat,’ Schaller says. ‘The eye patches enlarge the panda’s small, dark eyes tenfold, making the stare more powerful. A staring panda will hold its head low, so presenting the eye patches. To show lack of aggressive intent, a panda will avert its head, cover its eye patches with its paws or hide its face.’ Interestingly, the spectacled bear is the only other bear with comparably obvious markings around the eye.

Questions 1-8
Classify the following characteristics as belonging to

Write the correct letter A, B or C next to Questions 1-8 below.

Questions 9-13
Complete the sentences with words taken from the passage. Use NO MORE THAN TWO WORDS for each answer.

Write your answers in spaces 9-13 below.

9 The panda’s digestive system is that of a .
10 The giant panda must eat constantly because it can only a small amount of bamboo.
11 In winter, giant pandas cannot because of their feeding habits.
12 Spectacled bears build to help reach their food.
13 Giant pandas may use their to threaten other pandas.