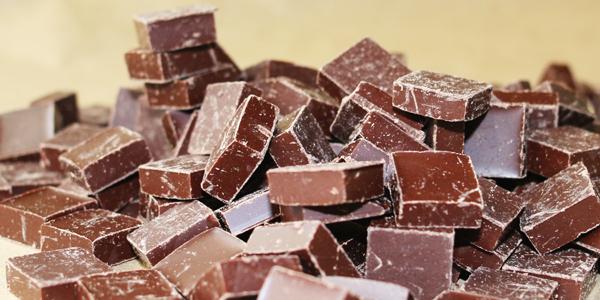 A The cacao tree, once native to the equatorial American forest, has some exotic traits for a plant. Slender and shrubby, the cacao has adapted to life close to the leaf littered forest floor. Its large leaves droop down. away from the sun. Cacao doesn’t flower, as most plants do at the tips of its outer and uppermost branches. Instead. its sweet white buds hang from the trunk and along a few Fat branches which form where leaves drop off. These tiny Flowers transform into pulp-filled pods almost the size of rugby balls. The low-hanging pods contain the bitter-tasting magical seeds.

B Somehow, more than 2,000 years ago. ancient humans in Mesoamerica discovered the secret of these beans. If you scoop them from the pod with their pulp. let them ferment and dry in the sun, then roast them over a gentle fire, something extraordinary happens: they become chocolaty. And if you then grind and press the beans, which are half-cocoa butter or more, you will obtain a rich crumbly. chestnut brown paste – chocolate at its most pure and simple.

C The Maya and Aztecs revered this chocolate, which they Frothed up with water and spices to make bracing concoctions. It was edible treasure, offered up to their gods, used as money and hoarded like gold. Long after Spanish explorers introduced the beverage to Europe in the sixteenth century. chocolate retained an aura of aristocratic luxury. In 1753. the Swedish botanist Carolus Unnaeus gave the cacao tree genus the name Theobroma. which means ‘food of the gods’,

D In the last 200 years the bean has been thoroughly democratized – transformed from an elite drink into ubiquitous candy bars, cocoa powders and confections. Today chocolate is becoming more popular worldwide, with new markets opening up in Eastern Europe and Asia. This is both good news and bad because. Although farmers are producing record numbers of cacao bean, this is not enough, some researchers worry, to keep pace with global demand. Cacao is also facing some alarming problems.

E Philippe Petithuguenin, head of the cacao program at the Centre For International Cooperation in Development-Oriented Agricultural Research (CiRAD) in France, recently addressed a seminar in the Dominican Republic. He displayed a map of the world revealing a narrow band within 180 north and south of the equator. where cacao grows. In the four centuries since the Spanish first happened upon cacao, it has been planted all around this hot humid tropical belt – from South America and the Caribbean to West Africa, east Asia, and New Guinea and Vanuatu in the Pacific.

F Today 70% of all chocolate beans come from West Africa and Central Africa. In many parts, growers practice so-called pioneer Farming. They strip patches of forest of all but the tallest canopy trees and then they put in cacao, using temporary plantings of banana to shade the cacao while it’s young. With luck, groves like this may produce annual yields of 50 to 60 pods per tree for 25 to 30 years. But eventually pests, pathogens and soil exhaustion take their toll and yields diminish. Then the growers move on and clear a new forest patch – unless farmers of other crops get there first. ‘You cannot keep cutting tropical forest, because the forest itself is endangered: said Petithuguenin. ‘World demand for chocolate increases by 3% a year on average. With a lack of land for new plantings in tropical forests, how do you meet that?’

G Many farmers have a more imminent worry: outrunning disease. Cacao, especially when grown in plantations, is at the mercy of many afflictions, mostly rotting diseases caused by various species of fungi which cover the pods in fungus or kill the trees. These fungi and other diseases spoil more than a quarter of the world’s yearly harvest and can devastate entire cacao-growing regions.

H One such disease, witches broom, devastated the cacao plantations in the Bahia region of Brazil. Brazil was the third largest producer of cacao beans but in the 1980s the yields fell by 75%. According to Petithuguenin, ‘if a truly devastating disease like witches broom reached West Africa (the world’s largest producer), it could be catastrophic.’ If another producer had the misfortune to falter now, the ripples would be felt the world over. In the United States, for example, imported cacao is the linchpin of an $8.6 billion domestic chocolate industry that in turn supports the nation’s dairy and nut industries; 20% of all dairy products in the US go into confectionery.

Today research is being carried out to try to address this problem by establishing disease resistant plants. However. even the best plants are useless if there isn’t anywhere to grow them. Typically, farmers who grow cacao get a pittance for their beans compared with the profits reaped by the rest of the chocolate business. Most are at the mercy of local middlemen who buy the beans then sell them for a much higher price to the chocolate manufacturers. If the situation is to improve for farmers, these people need to be removed from the process. But the economics of cacao is rapidly changing because of the diminishing supply of beans. Some companies have realized that they need to work more closely with the farmers to ensure that sustainable farming practices are used. They need to replant areas and create a buffer for the forest, to have ground cover, shrubs and small trees as well as the canopy trees. Then the ‘soil will be more robust and more productive. They also need to empower the farmers by guaranteeing them a higher price for their beans so that they will be encouraged to grow cacao and can maintain their way of life.

Questions 1-3
Choose the correct letter, A, B, C or D.
Write your answers next to Questions 1-3 below.

1 The flowers of the cacao plant appear

A at the end of its top branches.
B along all of its branches.
C mainly on its trunk.
D close to its leaves.

2 In Africa, banana trees are planted with the cacao plants in order to

3 In paragraph H, what is the writer referring to when he says ‘the ripples would be felt the world over’?

The Reading Passage has nine paragraphs labelled A-I. Which paragraph contains the following. Information?
Write the correct letter A-I next to Questions 4-9 below.

Questions 10-13
Complete the notes below.

Write NO MORE THAN TWO WORDS from the passage for each answer. Write your answers in spaces 10-13 below.

Ways of dealing with the plant’s problems