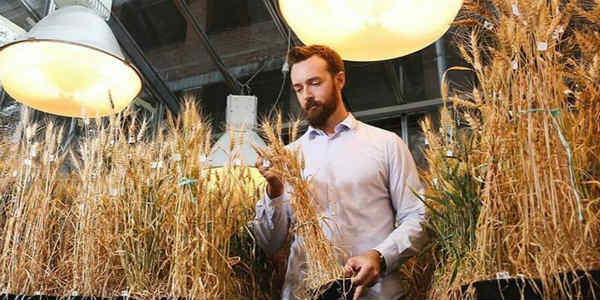 A The Australian sunflower industry is the major source of polyunsaturated fatty acids found in margarines and spreads. Recognised as the type of fatty acid most able to protect against heart disease, it is in everybody’s best interest that Australia has a competitive and healthy sunflower industry, but in Australia there is a constant struggle with the harsh climate. However, thanks to one special robot, farmers may be able to win the battle against drought.

B Dr Chris Lambrides, a research fellow at the University of Queensland, is nearing the end of a project that aims to develop more droughttolerant sunflowers by selecting flowers that use water more efficiently. He’s done this with the help of a robot developed by the Australian National University’s Research School of Biological Sciences.

C Plants undergo photosynthesis to produce energy in the form of sugar. This involves allowing carbon dioxide to enter the leaves through pores called stomata. Transpiration is the mechanism by which plants lose water through their leaves. This system is thought to facilitate the passage of minerals through the plant and is vital for healthy plants.

D However, in conditions of drought, the plants that can use the available water efficiently and lose less to the environment will be more likely to thrive and, in a commercial sense become more profitable. These plants are classified as having a high transpiration efficiency. When plants transpire, the leaves become cooler due to evaporation. Therefore, by measuring the temperature of the leaves, scientists can determine how much water is being lost through transpiration.

E When the project first began, the researchers used hand-held infrared thermometers to measure the temperature difference between leaves of different varieties of sunflowers in an experimental plot. Wind can affect leaf temperature, and the research team discovered that its initial approach did not cater for changes in wind speed, which could not be controlled as an experimental variable. The team therefore needed a technique to measure temperature continuously that would allow it to examine the effects of other variables such as humidity. They needed a robot.

F They designed a robot with two infrared thermometers set at 1800 to each other. The robot runs on an oblong track around the experimental plot and the thermometers operate on each side of the track. In order to minimize any variables from the two thermometers, they are rotated 1800 at the beginning of each run and the results are averaged. The infrared thermometers can be rotated on an angle to examine different parts of the foliage.

G The robot is also able to detect light intensity. It has a garage on the track, where it waits until the light intensity is high enough to give useful results. If the skies darken due to rain, heavy cloud cover or sunset, the robot makes its way back to the garage to wait.

H The main difficulty faced by the research group was to find an agronomist who could grow the perfect crop of sunflowers. The sunflower canopy had to be complete, with no visible soil, 50 that the thermometers would only measure the temperature of the plants and not the surrounding environment. Eight varieties of sunflower were examined. The data collected by the robot has been used by the research team to determine which variety has the highest transpiration efficiency.

I This is not the first time such methods have been used to determine drought-resistance in plants. The team and their robot have already made a major breakthrough in the Australian wheat industry with Drysdale Wheat, which signalled the arrival of a new technique for selecting drought-resistant species.

Complete the sentences with words taken from the passage. Use NO MORE THAN TWO WORDS for each answer.

Write your answers next to Questions 1-4.

Which paragraph contains the following information? Write the correct letter A-I next to Questions 5-12.