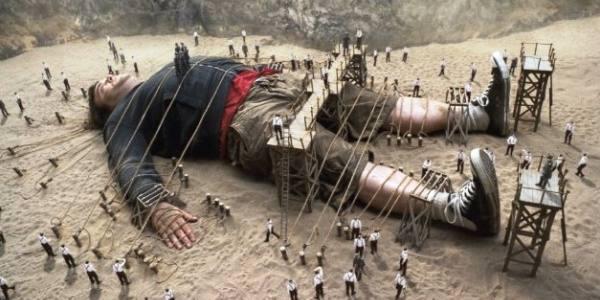 Gulliver’s Travels was unique in its day; it was not written to woo or entertain. It was an indictment, and it was most popular among those who were indicted—that is, politicians, scientists, philosophers, and Englishmen in general. Swift was roasting people, and they were eager for the banquet.

Swift himself admitted to wanting to

the world with his satire, and it is certainly in his tone, more than anything else, that one most feels his intentions. Besides the coarse language and bawdy scenes, probably the most important element that Dr. Bowdler deleted from the original Gulliver’s Travels was this satiric tone. The tone of the original varies from mild wit to outright derision, but always present is a certain strata of ridicule. Dr. Bowdler gelded it of its satire and transformed it into a children’s book.

After that literary operation, the original version was largely lost to the common reader. The Travels that proper Victorians bought for the family library was Bowdler’s version, not Swift’s. What irony that Bowdler would have laundered the Travels in order to get a version that he believed to be best for public consumption because, originally, the book was bought so avidly by the public that booksellers were raising the price of the volume, sure of making a few extra shillings on this bestseller. And not only did the educated buy and read the book—so also did the largely uneducated.

However, lest one think that Swift’s satire is merely the weapon of exaggeration, it is important to note that exaggeration is only one facet of his satiric method. Swift uses mock seriousness and understatement; he parodies and burlesques; he presents a virtue and then turns it into a vice. He takes pot-shots at all sorts of sacred cows. Besides science, Swift debunks the whole sentimental attitude surrounding children. At birth, for instance, Lilliputian children were

taken from their parents and given to the State to rear. In an earlier satire (A Modest Proposal), he had proposed that the very poor in Ireland sell their children to the English as gourmet food.

Swift is also a name-caller. Mankind, as he has a Brobdingnagian remark, is

“the most pernicious race of little odious vermin that Nature ever suffered to crawl upon the surface of the earth.”

Swift also inserted subtly hidden puns into some of his name-calling techniques. The island of Laputa, the island of pseudo-science, is literally (in Spanish) the land of “the whore.” Science, which learned people of his generation were venerating as a goddess, Swift labeled a whore, and devoted a whole hook to illustrating the ridiculous behavior of her converts.

In addition, Swift mocks blind devotion. Gulliver, leaving the Houyhnhnms, says that he

“took a second leave of my master, but as I was going to prostrate myself to kiss his hoof, he did me the honor to raise it gently to my mouth.”

Swift was indeed so thorough a satirist that many of his early readers misread the section on the Houyhnhnms. They were so enamored of reason that they did not realize that Swift was metamorphosing a virtue into a vice. In Book IV, Gulliver has come to idealize the horses. They embody pure reason, but they are not human. Literally, of course, we know they are not, but figuratively they seem an ideal for humans—until Swift exposes them as dull, unfeeling creatures, thoroughly unhuman. They take no pleasure in sex, nor do they ever overflow with either joy or melancholy. They are bloodless.

Gulliver’s Travels was the work of a writer who had been using satire as his medium for over a quarter of a century. His life was one of continual disappointment, and satire was his complaint and his defense—against his enemies and against humankind. People, he believed, were generally ridiculous and petty, greedy and proud; they were blind to the

“ideal of the mean.”

This ideal of the mean was present in one of Swift’s first major satires, The Battle of the Books (1697). There, Swift took the side of the Ancients, but he showed their views to be ultimately as distorted as those of their adversaries, the Moderns. In Gulliver’s last adventure, Swift again pointed to the ideal of the mean by positioning Gulliver between symbols of sterile reason and symbols of gross sensuality. To Swift, Man is a mixture of sense and nonsense; he had accomplished much but had fallen far short of what he could have been and what he could have done.

Swift was certainly not one of the optimists typical of his century. He did not believe that the Age of Science was the triumph that a great majority of his countrymen believed it to be. Science and reason needed limits, and they needed a good measure of humanism. They did not require absolute devotion.

Swift was a highly moral man and was shocked by his contemporaries’ easy conversion to reason as the be-all and end-all of philosophy. To be so gullible amounted to non-reason in Swift’s thinking. He therefore offered up the impractical scientists of Laputa and the impersonal, but absolutely reasonable, Houyhnhnms as embodiments of science and reason carried to ridiculous limits. Swift, in fact, created the whole of Gulliver’s Travels in order to give the public a new moral lens. Through this lens, Swift hoped to “vex” his readers by offering them new insights into the game of politics and into the social follies of humans.