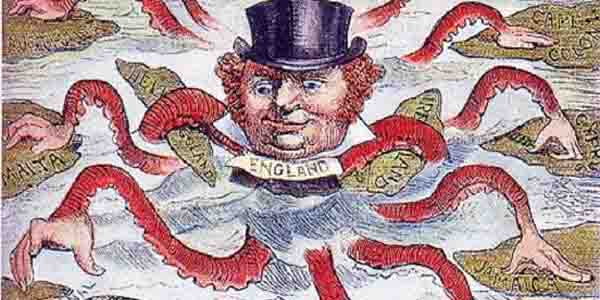 The evil of Imperialism started as a result of Industrial Revolution. Under this influence, the landlords, farmers and peasants of rural class of English society were converting their farms, lands and dairies into industrial units. As the industries or industrial units were growing, European countries’ demands for raw material as iron, chemical, oil etc. were also increased. To fulfill their basic demands of running the industrial units for modernization, European as well as other super powers extended their immense power to the other territories of the other weaker or countries, which were loaded with natural sources. To capture the natural sources of other territories of the countries, these imperial countries outwardly gave an expression to the rest of the world that they had intervened into these territories to civilize the ignorant and uncivilized natives. But under expanding economics, this evil of imperialism was committed by Western countries who were:

This practice was carried out with greed, exploitation and violence growing more after the mergence of the North American territory. Now these allied countries captured distant lands of Philippines, the Caribbean Central America, Barbary coastal parts of Europe and the Middle East, Vietnam and Korea. Said rightly says in the regard:

“The US was forward as an empire … that would expand its population and territory and increase in power”.

Subcontinent was also dominated and ruled by Englishmen. As the history of subcontinent itself shows that Englishmen invaded over sub-continent through trade and business and ultimately occupied the whole territory. As this territory was enriched or loaded with mineral and natural sources, it fulfilled the demands and needs of raw material for the industrial units of the Western Countries for a long time. There was a time when Romans also exploited or looted the territories of other countries but the imperialism of French and the British was conducted under the mask of civilizing the natives and this is the evil mask, which Edward Said tears off in order to reveal the real face of Imperialism. To prove this fact, Said gives reference of Conrad’s Heart of Darkness in which Conrad has openly exposed the violation, exploitation and cruelty of the natives of Congo in Africa. Another writer named as Franz Fanon also openly says in this regard in the following words:

“Colonialism and imperialism have not paid their dues when they withdrew their flags and their police forces from our territories. For centuries the foreign colonists have behaved in the under developed world like nothing more than criminals”.

The literature of this time only exhibits the vice of imperialism because whatever the writers and critics felt in that period, portrayed through their literary compositions and works. Throwing light on the term “colonialism” Said utters:

“Colonialism which is almost always a consequence of imperialism is the implanting of settlements on distant territory”.

The ending of the Second World War heralded the message of freedom and liberty from the foreign imperial rulers and as a result, many colonized territories were decolonized, yet the influence of the cultural rites and customs was very much dominant on the ways of life of subjugated people. Though direct colonialism like the British in India’ and French in Algeria has almost vanished yet it does not end from its roots absolutely. Now it is present in its other forms. It is rather reflected in the changed outlook or mentality of the two nations. Said further says that after the end of the cold war, the super powers of the world devised a new world order. In this respect, US is at the top of the list. In other words, it is a new brand of imperialism. This-new world order is itself a doctrine of US’s responsibility to set things right all over the world. In the connection, Said says:

“The goal of US foreign policy is to bring about a world increasingly subject to the rule of law. But it is the United States which organizes the peace and defines the law”.

Said has said that these terms as “world responsibility”, “new world order” symbolize a new brand of imperialism – a greater evil than its predecessor. It is also a causeless exploitation of the rights as well as the raw materials of the third world countries. To conclude this, we can say that what Said has delivered in his lecturer on “Culture and Imperialism”, absolutely shows the clear picture of the Evil of Imperialism. This imperialism even did not come to end after the post war decolonization but it shaped in newly devised world order by the US, which was no more than a worst kind of reproduction of the old imperial order under the feigned guise of setting the things right in all the other countries. God knows how long the evil of US Imperialism will continue.