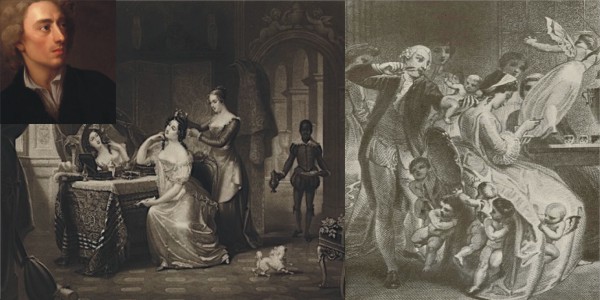 Heroic or Epic poems are poems like the Odyssey, the Aeneid, and Paradise Lost dealing with man in his exalted aspects. Their action is weighty, their personages are dignified and their style is elevated. In all the epics, gods and daemons, take active part in human affairs and guide their destiny. In contrast, the mock-epic is a poetic form which uses the epic structure but on a miniature scale and has a subject that is mean and trivial. The purpose of the mock-epic or mock-heroic poem is satirical. In fact, a mock-heroic poem is not a satire on poetry itself, but the target of the attack may be a person or an institution or the whole society. The subject of such a poem is trivial or unimportant, but the treatment of the subject is heroic or epic and such exaggeration of the trivial naturally arouses laughter. The pleasure of the poem, as Ian Jack points out, ensues from:

That Pope was conscious of his intentions to make The Rape of the Lock a mock-epic is evident from the title. Homer’s Iliad which describes the events arising out of Helen’s elopement with a Trojan prince and the war between the Greeks and the Trojans can be appropriately described as a poem dealing with the “Rape of Helen”. The title of Pope’s poem, The Rape of the Lock is thus a parody of the Iliad in this sense; for in this poem, the mighty contest ensues from the assault on the lock of Belinda’s hair. The Rape of the Lock parodies the serious epics not only in it title but also in the overall structure. At the beginning, there is invocation to the Muse as in an epic. Pope imitates as in:

“I sing – this verse to Caryll Muse! is due/ This ev’n Belinda may vouchsafe to view: Slight is the subject, but not so the praise/ If she inspire, and he approve my lays”

The invocation, the description of the heroine’s toilet, the journey to Hampton Court , the game of ombre magnified into a pitched battle all lead up to the moment when the peer produces the fatal scissors. But the action of the mortals was not enough. Pope knew that in true epics the affairs of men were aided by the Heavenly Powers. He, therefore, added the supernatural beings – sylphs, gnomes and nymphs– as agents in the story. The gods of the epic are heroic beings, but pope’s deities are tiny. Unlike the deities of the epics, who act guardian agents of the epic heroes, Belinda’s guardian sylph, Ariel is an ineffectual airy being who deserts her at the critical moment. The supernatural machinery mocks at the epic deities. Pope describes the diminutive gods as:

“the light militia of the lower sky”

Belinda screams like the Homeric poems and dashed like the characters of the great epics. We find a battle drawn to combat like the Greek warriors but it is only a game of cards on a dressing table. There are several instances of Burlesque-treatment. There is Belinda’s voyage to Hampton Court which suggests the voyage of Aeneas up to the Tiber in Virgil. There is a coffee party which is a parody of the meals frequency described in Homer. The combat at the end recalls the fighting which is found anywhere in the ancient epics. The Cave of Spleen is a parody of an allegorical picture from poets like Spenser. Just before the cutting of the lock, when Ariel searches out the close recess of the virgin’s thoughts. There he finds an earthly lover lurking in her heart, and Pope tells us that Ariel retires with a sigh, resigned to fate. This situation echoes the moment in Paradise Lost when after the fall of Adam and Eve, the Angles of God retire sad to heaven. Belinda’s dressing and cosmetics has been described in a way that would suit the arming of a warrior like Achilles. She appears as:

On her breast a sparking cross she wore/ Which Jews might kiss, and infidels adore.

Though the subject matter of the Rape of the Lock is trivial and ridiculous, the style, diction and versification are rarely so. The diction is exalted and the heroic-couplets are carefully polished and chiseled. Mock-epic is an example of the collation of the great with the little. In the Rape of the Lock, Pope frequently juxtaposes the heroic with the trivial to produce the mock-epic effect. The very opening couplet juxtaposes “Mighty contest” with trivial things”. In following couplet, chastity is equated with ‘frail China jar’. The effect of this juxtaposition is highly amusing and startling.

Whether the nymph shall break Diana’s law, Or some frail China jar receive a flaw,

The Rape of the Lock is a highly subtle and complex mock-epic. It is a nearly perfect example of its genre. The genre of the mock-epic not only because it parodies the epic conventions throughout, but also because it provides a highly amusing drama of its own rights. The greatness of the poem is due to Pope’s genius as well as to the care and pains he took in a different form. The balance between the concealed irony and the assumed gravity is as nicely trimmed as the balance of power in Europe. The little is made great and the great little. You hardly know whether to laugh or weep. It is the triumph of insignificance of foppery and folly. It is the perfection of the mock-heroic.