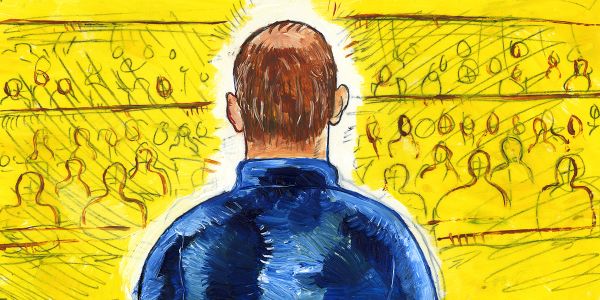 “Ode on a Grecian Urn” was written in May of 1819 when Keats was 23 years old and his life was in emotional turmoil. In the previous six months his brother Tom had died, and he had met and fallen in love with Fanny Brawne who, at the time the poem was written, lived next door to him in Hamstead. It was a period of intense creativity during which Keats wrote his great odes; in them, he explored his emotions by addressing, describing and questioning some idea or symbol that he celebrated. Keats’s odes are a form of meditative poetry. In meditation, a person thinks intensely upon and draws conclusions from a subject. By writing an ode, originally a Greek poetic form, Keats is making his own claim to permanence. The “Ode on a Grecian Urn” is Keats’s own “silent form” meant to perform a similar function — “tease us out of thought” — as that of the original Greek urn, that, ironically, does not exist. There is smooth transition of ideas and emotions in the poem starting with:

“Thou still unravished bride of quietness”

Keats addresses the silent urn and asks it the significance of its decorations. Further, Keats addresses the decorations; their actions remain incomplete but, unlike those of flesh and blood, are permanent. The third stanza celebrates such permanence as a continual time of youth, strength, enjoyment, passion, happiness and love, unlike the unfulfilled and passing desires and pleasures of the flesh. The center of the poem brings to a climax this celebration of an idealized life: “More happy love! more happy, happy love! / For ever panting, and for ever young.” An unusual intensity is created by the repetition of such words as “more,” “happy,” and “for ever” and by the suggestion of a continuing activity in “piping,” “panting,” “Breathing,” “burning,” and even “parching.” There is a change in mood in stanza four, as the past is found to include disturbingly strange rituals, blood sacrifices, and ways of life we do not understand. The town is desolate in being empty, but it also seems dismally silent after the activity and joys of the previous stanzas. Keats does not indicate what we are think of this, but our thoughts might range from interest in other customs, frustration at not knowing more, to feeling that the past is no more a source of constant pleasure than the present. Going further, the passions are more pronounced as here:

“She cannot fade, though thou hast not thy bliss, / For ever wilt thou love, and she be fair!”

If the “Ode to a Nightingale” portrays Keats’s speaker’s engagement with the fluid expressiveness of music, the “Ode on a Grecian Urn” portrays his attempt to engage with the static immobility of sculpture. The Grecian urn, passed down through countless centuries to the time of the speaker’s viewing, exists outside of time in the human sense–it does not age, it does not die, and indeed it is alien to all such concepts. In the speaker’s meditation, this creates an intriguing paradox for the human figures carved into the side of the urn: They are free from time, but they are simultaneously frozen in time. They do not have to confront aging and death (their love is “for ever young”), but neither can they have experience (the youth can never kiss the maiden; the figures in the procession can never return to their homes). The poet with the urn as he asks questions:

“What mad pursuit? What struggle to escape?”

The speaker attempts to engage with scenes on the urn; each time he asks different questions. First, he examines the picture of the “mad pursuit” and wonders what actual story lies behind the picture: “What men or gods are these?” Of course, the urn can never tell him the whos and whys of the stories it depicts, and the speaker is forced to abandon this line of questioning. Subsequently, he examines the picture of the piper playing to his lover beneath the trees. Here, the speaker tries to imagine what the experience of the figures on the urn must be like; he tries to identify with them. He is tempted by their escape from temporality and attracted to the eternal newness of the piper’s unheard song and the eternally unchanging beauty of his lover. He thinks that their love is “far above” all transient human passion, which, in its sexual expression, inevitably leads to an abatement of intensity–when passion is satisfied, all that remains is a wearied physicality: a sorrowful heart, a “burning forehead,” and a “parching tongue.” His recollection of these conditions seems to remind the speaker that he is inescapably subject to them, and he abandons his attempt to identify with the figures on the urn. There is a burst in the poet’s emotions and in this ecstasy; he is trying to reach beyond the physical and perceive the spiritual or ideal as in:

“Heard melodies are sweet, but those unheard”

Finally, the speaker presents the conclusions drawn from his attempts to engage with the urn. He is overwhelmed by its existence outside of temporal change, with its ability to “tease” him “out of thought / As doth eternity.” If human life is a succession of “hungry generations,” as the speaker suggests in “Nightingale,” the urn is a separate, self-contained world. It can be a “friend to man,” as the poet says, but it cannot be mortal; the kind of aesthetic connection the speaker experiences with the urn is ultimately insufficient to human life. The final two lines, in which the speaker imagines the urn speaking its message to mankind:

“Beauty is truth, truth beauty, that is all / Ye know on earth, and all ye need to know.”

The central thought of this ode is the unity of Truth and Beauty. Beauty and Truth, says Keats, are not two separate things. They are one and the same seen from two different aspects. What is beautiful must be true, and what is true must be beautiful. Every piece of art which is based on truth or reality must be beautiful; and every beautiful work of art must have a hard core of truth in it. Thus Keats seems to reject the school of gross realism in art, and the school of ornament for ornament’s sake. Despite Keats’ dictum, the lines have become largely a matter of personal interpretation. Furthermore, Truth and beauty belong to radically different realms, and there is nothing especially true about a beautiful car. We say beauty is in the eye of beholder. Keats is using paradoxical language to make a claim for an alternative kind of truth. This claim makes sense within the logic of the poem, but it is also meant to have a wider application to how we view reality. The poem makes claims about the value and uses of art against other truths. Other kinds of truth might be scientific or religious but the poem says clearly that “on earth” we cannot know anything more true than what we will learn from art and that such knowledge is sufficient. Thus the poem becomes a journey into the interior of Keats’s mind and the soul and beliefs. The poet uses an external object to provoke the reader to contemplate the aesthetic conflict. This ode shows Keats in a particularly contemplative state. While the urn keeps the reader grounded in the realities of the outside world, the reader is a companion to the poet, who manipulates extreme emotions and ultimately concludes that life can only be captured by living it experientially, not trying to replicate it in art forms.