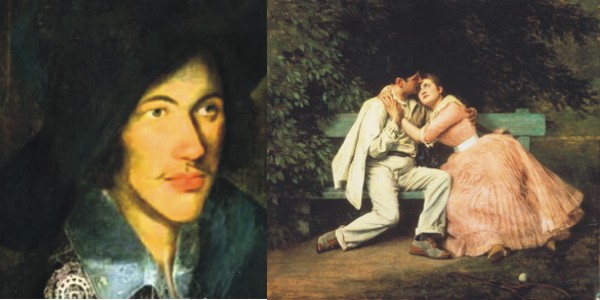 The variety of Donne’s love poetry is really remarkable. He hinges between physical and holy love, between cynicism and faith in love and above all the sanctity of married life. He was born at the time when writing love-poems was both a fashionable and literary exercise. Donne showed his talent in this genre. Donne does not lay stress on beauty or rather the aesthetic element in passion. His poems are sensuous and fantastic. He goes through the whole gamut of passion. Dryden writes:

“Donne affects the metaphysics not only in his satires but in his amorous verses where nature only should reign. He perplexes the minds of the fair sex with nice speculations of philosophy, when he should engage their hearts and entertain them with love”

His poems are entirely different from the Elizabethan love-lyrics. They are singular for their fascination, charm and depth of feeling. In “Apparition”, Donne changes the whole concept of love:

“When by thy scorn, o murderess,/ I am dead/ And that thou think’st thee free/ From all solicitations from me, / Then shall my ghost come to thy bed”

Tenderness and sentiment are not the qualities to be found in Donne’s poetry. Donne in “Lover’s Infinitenesse”, pleads with his beloved that she should give him a part of her heart. After she has given him the part, he demands the whole heart. This is the goal and consummation of love. He then startles and outrages the expectations of his readers.

“I long to talk with some old lover’s ghost;/Who died before that God of love was born, / Twice or thrive had I loved thee, /Before I knew they face or name.”

Donne’s love poems can be divided under three phases. Firstly, there is the cynical which is anti-woman and hostile to the fair-sex. The poet, through a series of images, proves that it is impossible to find a true and faithful woman as it is equally impossible to produce a child from a mandrake root. Petrarchan and Elizabethan poets honored woman as the goddess, but Donne sometimes mocked at them. Frailty, thy name is woman was quite popular in Donne’s time as we see in “Song”:

“Goe, and catche a falling star/ Get with child a mandrake roote”

Secondly, there is the strand of happy married life of conjugal love in poems like “A Valediction: forbidding mourning”. Thirdly, there is the Platonic strand, as in “The Canonization” where love is regarded as a holy emotion like the worship of a devotee to God. Donne’s treatment of love-poems is realistic and not idealistic because he knows the weakness of the flesh, pleasures of sex, the joy of secret meetings. However, he tries to establish the relationship between body and soul. True love doesn’t pertain to the body; it is the relationship of body and soul to the other soul. Physical union may not be necessary as in A Valediction: a forbidding mourning, written on the poet’s temporary separation from his wife. During absence, the lovers’ two souls are not separated but undergo:

However, in the Relic, the poet regarded physical union as the necessary complement. Despite the realistic touches, Donne nowhere seems to draw the physical beauty or contours of the female body. Rather, he describes its reaction on the lover’s heart. It is highly surprising that a poet so fond of sex, be restrained from describing the physical patterns of the female body. That sex is holy whether inside or outside marriage is declared by Donne in his love-poems. If love is mutual, physical union even outside marriage cannot be condemned. As a Christian, he may not justify extra-marital relationships, but as a lover, he does accept and enjoy this reality. Donne feels that love-bond is necessary for sexual union otherwise mere sex without any spiritual love is mean. However, true love can exist outside marriage. He doesn’t feel that woman is a sex-doll or a goddess. She is essentially a bundle of contradictions. He believes in ‘Frailty, thy name is woman’. His contempt for woman is compensated by his respect for conjugal love. At times, he regards woman as the angel who can give him ultimate bliss. This two-fold attitude is Donne’s typical quality. He broke with the traditional Petrarchan concept of poetry and created passion and though in his poems. Donne shows the supremacy of true love, which is the merger of two souls as in The Sun Rising:

“Love, all alike, no season knows, nor clime, / Nor houres, dayes, monthes, which are the rages of time.”

Donne has certainly been an innovator of a new kind of love-poetry. What surprises the reader is the variety of different moods and situations of the theme of love – sensual, violent, and full of vivacity of life. There is scorn, cynicism, bitterness and sarcasm but the force of love is genuine. Donne is one of the greatest English love-poets who revolutionized the concept of love.