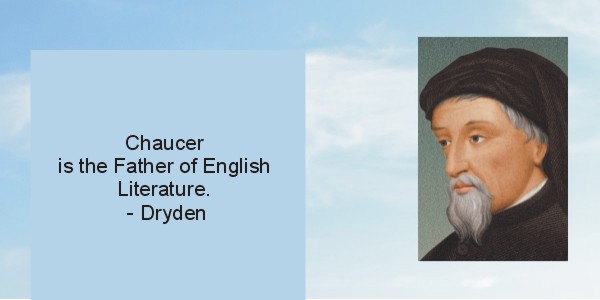 J.M. Manly avers in the Cambridge History of English Literature, ‘Fourteenth century was a dark epoch in the history of English’. This statement is both historically and linguistically correct when applied to the medieval period. The English Language was in infancy and required the hands of a craftsman and the mind of a genius to reach its maturity. This task was left to no other than Chaucer because other notable writers of the age namely Wycliffe, William Langland and Gower wrote little in English. Even Shakespeare felt doubtful about the future of English in sixteenth century when much had already been accomplished, but it was Chaucer who adopted a distinct style in writing in English. Literature and language were in the process of formation, which were established on firm foundations by Chaucer. That is why Dryden hails Chaucer as:

English is linguistically divided into three periods: Old English dating from 5th to 14th century, Middle English from 14 to 18 century and the Modern English from 18 century to present day. Chaucer was born in what is called the Age of Middle English. His style and contribution to the English Language are remarkable. That is why David Daiches avers, “with Chaucer English language matured”. The remark is true as earlier writers like King Alfred used English as it was and made no significant changes. The Prologue is Chaucer’s most celebrated and established work in which he uses a narrative style to express his viewpoint. He uses several poetic devices to liven up his style. Chaucer followed the rhetorical principles laid down by Gaufred de Vinsauf in his “Nova Poetria. These principles are description and narration. His descriptive and narrative technique is nowhere so visible as in the Canterbury Tales. In the prologue, he uses mainly the descriptive style and in the Tales, he employs the narrative style. The most remarkable thing is that he consummates the his style as averred by Robert P. Miller:

Why Robert Miller or David Daiches credit Chaucer can be best understood by examining the salient characteristics of his style. Firstly, Chaucer’s style is marked by lucidity of expression, joyous originality and easiness free of ambiguities and direct philosophical maxims. In describing nearly all his characters, he uses colloquial language easy to understand for a common man. For example, Chaucer says, “Knight was as meeke as maide” or “Prioress leete no morsel falle from his lippes”. His similes and metaphors are befittingly employed throughout the Prologue. Secondly, his style is not bookish or crammed. His style is rather cultivated and tailored as much to the intellectuals as to the laymen. This is the reason The Prologue has been popular with men of all levels of understanding. Thirdly, style is humorous and ironical. His style is not pointed like that of Juvenal or Swift, he does criticize society, in fact his Prologue is a criticism of life in the words of Matthew Arnold as literature should be, but he passes from character to character with a smile and uses irony as his weapon to attack the follies of society rather than satire. His ironical remarks about Monk are worth quoting:

Chaucer ironically remarks about Monk, “I seyde his opinioun was good”. His light ironical style places his with Horace. Fourthly, Chaucer takes up the description of his characters from the positive traits and jumps to the negative ones to startle the reader. Squire, Prioress and Wife of Bath are good characters in the first few lines, it is just after a few remarks, that we come to understand their real nature. Fifthly, his style is not ostentatious. He doesn’t exhibit his art through his style. We simply see the picture of society and not the technique through which it was drawn. So Chaucer believes in the words of Swift that real art lies in the concealment of art. And further Chaucer remarks about him:

“Lat Austyn have his swynk to hym reserved”

His style is narrative, descriptive and reflective and has all qualities of speech. His sentences are short and simple in their structure. His stylistic qualities and poetic genius contributed to English what no other did before his time as ascertained by David Daiches with Chaucer, the English language and literature grew at a bound to full maturity. No other Middle English writer has his skill, his range, his complexity and his large humane outlook. His light humor and ironical pieces have rendered such services to English, which can only be compared to those of Emperor Augustus in Ancient Rome who found Rome as brick and left it as marble. An apt remark from Lowell will finely conclude the topic that Chaucer found English in dialect and left it a language.