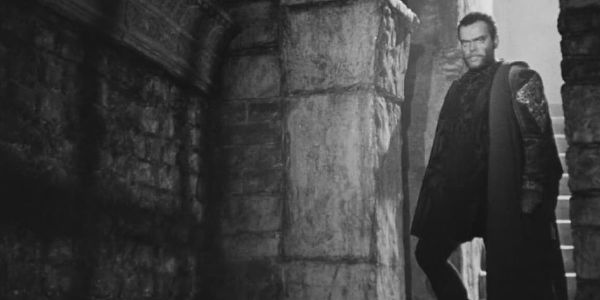 Unlike Hamlet where evil is pervasive and hangs over the whole country. In Othello, it is personified in one character who wears the mask of seeming virtue. In Iago, we see evil as deception and as a direct challenge to the order and harmony of the universe.

Iago’s superficial brilliance and self-control is the ‘reason’ for renaissance skepticism which in Shakespeare’s day, was challenging the great vision of harmony and order.

Despite his hypocrisy, Iago reveals himself to the reader as an active force of evil right from the first scene of the play. It is Roderigo alone who is given the insight into Iago; but he is foolish and doesn’t understand the implications of Iago’s plans. Iago stands for social disintegration. He is not one of the servants who get paid by their masters for their service and are loyal to them. He is the wicked one whose loyalty is a mask.

The supreme egotism of Iago is a manifestation of the code of ‘reason’ by which he lives. True human reason in terms of Renaissance Christian humanism was a reflection of the supreme wisdom of God. And it consisted in submitting one’s will to the purposes of Go. Iago’s reason is the sin of pride, for it denies the supremacy of God and sees man as the sole author of his destiny, able to control himself and others by the power of his mind. It is expressed in his speech to Roderigo which begins the words

“Virtue! A fig! ‘tis in ourselves that we are thus or thus.”

And also where he compares our bodies to gardens. In denying the purposes of the power of God, Iago strikes at the very roots of Christian Humanism. He is only a lust of the blood and a permission of the will. He is conceited and excessively proud of his intelligence and wisdom which ultimately cause the fall of his personality.

Iago’s betrayal of himself is quite expected and possible despite Bradley’s wonder that how his supreme intellect should finally betray him into such colossal errors as his misjudging the relationship between Othello and Desdemona and the character of his own wife, Emilia. But it is in the very nature of Iago’s intellect that he should be so. He sees that Desdemona’s love for the Moor was only animal lust and nothing else. He can perceive only the outward appearance of Othello; he can’t see the qualities for which Desdemona married him; and thus their relationship seems only a product of lust which lust must destroy. Out of Iago’s failure of perception will come his own destruction, but his failure is inherent in the very ‘reason’ by which he lives.

The audience doesn’t have the same views about Iago as the other characters in the play do. The audience knows him to be a Semi-devil. The very incarnation of Devil and the negation of moral values.To the audience, he is devil; but to Othello, he is

Honest is very much like that of Claudius in Hamlet. He stands for false appearance and it is fitting that Shakespeare should give the celebrated lines:

Who steals my purse steals trash / But he that filches from me my good name / Robs me of that which not enriches him / And makes me poor indeed.

Such a concern for reputation is a manifestation of pride

Iago personifies evil in the guise of good whereas in Othello himself, we have a depiction of true virtue which seems to be wearing many of the signs of evil. As in Cinthio’s story, Othello’s wedding with Desdemona was unnatural. Cinthio doesn’t mention the blackness of the Moor, mentioning it only once in the story. In the Renaissance, the color black was a symbol of lechery. It was so commonly used in the books that it was also the color of the devil whose redness is a fairly recent innovation. To Shakespeare’s audience, Othello would have all the outward appearance of the blacker devil which Amelia calls him. His marriage to Desdemona would appear as aberration in nature. Iago awakens Brabantio with a description of the marriage in these terms, punctuated by images of brute sexuality – comparing Othello to a black ram who is going to take advantage of Brabantio’s white ewe.

The first two acts of the play these themes, the evil of the unnatural marriage and that of Iago’s mask of seeming virtue. Othello has the blackness of Satan, Iago the whiteness of truth and virtue. True virtue bears the mark of evil and evil is marked with the semblance of honesty. Shakespeare assures the audience that of the falsity of these outward sign, that Iago is seemingly honest and that Othello, despite his appearance, is a man of true nobility whom Desdemona can love for his ‘honours and his valiant parts’. We see his dignity before the consul where he denies the very lechery which his outward color represents. Shakespeare’s deliberate reversal of normal appearance is so shocking that the audience must be left till incredulous, with an uncertain fear that appearance be still be truth. This fear is supported by Brabantio’s warning:

Look to her, Moor, if thou hast eyes to see / She has deceived her father, and may thee

Upon this seeming violation of nature, Iago will work his temptation of Othello and under Iago’s influence; Othello will see Desdemona exactly Brabantio has see her.