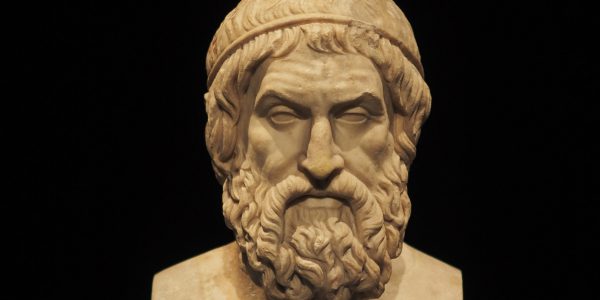 Oedipus is the protagonist who has good and bad qualities. He is not a puppet in the hands of fate; rather his tragedy is caused by his Hamartia (error of judgment). That character is destiny is largely true when applied to Oedipus. Oedipus is a tragic hero fights for the common good of people and sacrifices himself in the process to evoke catharsis in us. Oedipus endures most of the conflicts and gains nobility at the cost of his death-like sufferings. Aristotle defines a tragic hero as:

“an intermediate sort of person, a man not pre-eminently virtuous and just, whose misfortune, however, is brought on him not be vice or depravity but by Hamartia”

Oedipus is one such character whose tragedy is not caused by fate but by himself. Oedipus was a man of royal birth and possessed excellent qualities of character, though he is not perfect. As a King, Oedipus was a great well-wisher of his people and a man of intellect. However, what marks him personality is his Hamartia (error of judgment) which makes him a free agent not working as a predestined puppet. Oedipus’ Hamartia is his ‘Hubris’ which means ‘Pride’. He is hasty in judgment and excessively proud of his intelligence. He quickly loses his temper with Teiresias when he finds the prophet reluctant to reveal the truth. He jumps to the conclusion that Teiresias has been bribed by Creon and that the two of them have hatched a conspiracy. He says:

The events in Oedipus Rex show a relationship of man’s free will within fate, which the Greeks believed guided the universe. Man was free to choose and was held responsible for his own actions. Both the concept of fate and free will played an integral part in Oedipus’ destruction. Although he was a victim of fate, he was not controlled by it. Oedipus was destined from birth to marry his mother and to murder his father. This prophecy, as warned by the oracle of Apollo was unconditional and would pass, no matter what he may have done to avoid it. His past actions were controlled by fate, but what he did in Thebes; he did of his own will. From the beginning, Oedipus took many actions leading to his own downfall. Oedipus could have waited for the plague to end, but for his suffering people, he had Creon go to Delphi. When he learned of Apollo’s word, he could have calmly investigated the murder, but in his hastiness, he curses the murderer, and himself:

“I pray that that man’s life be consumed in evil and wretchness/ And as for me. this curse applies no less

In order for Sophecles’ Greek audience to relate to the tragic figure, he had to have some type of Hamartia. His pride, insolence and disbelief in the gods, and unrelenting quest for the truth ultimately contributed to his destruction. When Oedipus was told, that he was responsible for the murder of Laius, he became enraged and called the old oracle a liar. He ran away from his home, Corinth, in hopes of outsmarting the divine will. Like his father, Oedipus also sought ways to escape the horrible destiny told by the oracle of Apollo. The chorus warns us of man’s need to have reverence for the gods, and the dangers of too much pride.

Oedipus’ desire to uncover the truth about Laius’ murder and the mystery surrounding his own birth, led him to the tragic realization of his horrific deeds. Teiresias and Jocasta tried to stop him from pursuing the truth. For example a part of the last conversation between Jocasta and Oedipus after realizing that the prophecy had came true, Jacasta begs him to just let the mystery go unsolved:

“Listen to me, I beg you: do not do this thing”

He is unable to stop his quest for the truth, even under his wife’s pleading. For it is in his own vain that he must solve the final riddle, the riddle of his own life. Oedipus becomes tragic hero when learned that his fate had come to pass and he feels cursed by it. At the end, when Oedipus gouges out his eyes, the chorus asks him what god urged him to blind himself. Oedipus replied:

“Children, the god was Apollo…But the blinding hand was my own”

He claimed full responsibility for his actions. The true sin lay in his overzealous attempt to raise himself to the level of the gods by trying to escape his fate. The chorus chants about how in prosperity, he was envied by all men and how he won happiness by pride (by slaughtering the Sphinx, and by trying to deceive the god’s will.). The fact that Oedipus’ motives for killing his father, Laius, and wedding his mother, Jocasta, it does not take away from the horrific nature of the crimes. The last act of destruction was caused by Oedipus’ free will, but his tragic fate came about because of the nature of the cosmic order and role of the gods in human affairs. The chorus concludes this tragedy by warning the Greeks, that the only way to happiness is through respect towards the gods.