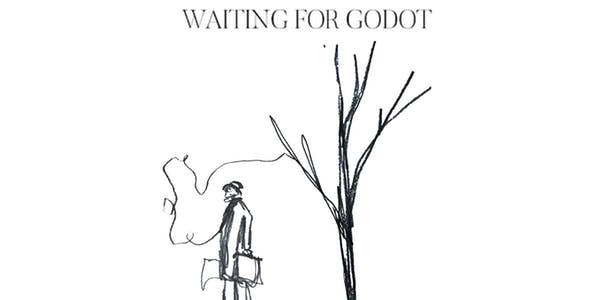 Exhistentialism is a philosophical theory or approach which emphasizes the existence
of the individual person as a free and responsible agent determining
their own development through acts of the will. For many years, people have been searching for answers regarding the purpose of human existence.

The answers often seem impossible to find because people do not know how or where to begin looking.

Their desperation to discover their own true purpose causes them to believe that their being is imposed upon them by unknown forces. These forces allow people to continue their search for meaning even when their situations seem hopeless. “Waiting for Godot” by Samuel Beckett is a play that captures the fate of human existence as people depend on chaos, hope and chance to provide their lives with purpose and meaning as they continue to wait for salvation.

The world in which the main characters, Vladimir and Estragon, exist contains no orderly sequence of events. Chaos is shown as the actions in the first act occur similarly in the second act without any recollection of them ever happening before.

The two tramps continue to return to the same place day after day to wait for Godot. The tree that serves as the only setting to their humble place is bare one day and flowers with leaves the next.

None of the characters seem to have any memory of the happenings the day before. The sun quickly fades to reveal night and the reality that Godot hasn’t come. Although Beckett only shows his audience two days in the life of Vladimir and Estragon, it is believed that these two characters have been and will continue to repeat the same actions day after day until what they are waiting for has arrived.

Chaos is also shown in the differentiation between Pozzo and Lucky within the time that they disappear from the stage. The first time Pozzo and Lucky meet Vladimir and Estragon, Pozzo is on his way to the market to sell him slave. Pozzo is healthy and wishes to sell Lucky who has gone from being an enjoyable slave to one who is just utterly annoying. The next day when the same characters meet in the same place, the whole situation has changed. Vladimir happens to be the only person who remembers the events of the past day. Pozzo is now blind and Lucky mute. Pozzo is dependent on Lucky to lead him and would never dream of giving him up. He claims that Lucky has always been mute despite his long philosophical speech that he delivered the day before. Vladimir, frustrated that no one remembers the events of the past day, asks Pozzo if he has any recollection of meeting them before, to which Pozzo responds,

The chaos that these characters experience in their lives derives from the fact that they are unable to remember or foretell any of the events of their lives. They live one day at a time, not knowing what happened to them yesterday nor what will happen tomorrow as they await for Godot who they hope will save them from their wretched lives.

“Nothing can be done”

is a phrase that occurs often throughout the play to allow the audience to realize that all these two characters have is hope that Godot will show up and save them. Until this time, all they can do to pass the time is wait. Their daily struggles consist of meaningless ways to pass the time as they avoid the hopelessness that they feel in their lives.

“What are we doing here, that is the question. And we are blessed in this, that we happen to know the answer. Yes, in this immense confusion one thing alone is clear. We are waiting for Godot to come–” (Beckett, 91).

Although to ordinary people the lives of Vladimir and Estragon contain no meaning, they have hope that Godot will save them. They are aware of what they are waiting for and continue to pass time in ways that will encourage them to remain hopeful even though there is a possibility that they will forever be waiting.

The main idea behind the play is that Vladimir and Estragon depend on chance to reveal the true meaning behind their existence. Throughout the play they continuously await the arrival of Godot even though they do not realize that there is a chance that one will be saved and one will be damned or they could both be damned. The reality that their lives are based on chance is revealed early in the play when Vladimir speaks of the parable of the two thieves.

“One of the thieves was saved. It’s a reasonable percentage.” (Beckett, 5).

The word ‘percentage’ illustrates the means by which the fate of humanity is determined. It is random and there is only a percentage chance that a person will be saved or damned and that person is helpless to affect the outcome.

Vladimir continues to describe the story of the two thieves. “And yet…how is it – this is not boring you I hope – how is it that of the four Evangelists only one speaks of a thief being saved. The four of them were there – or thereabouts – and only one speaks of a thief being saved.” (Beckett, 6). Beckett uses the Bible to illustrate that chance is essential in determining the future outcome of our lives by citing references from a sacred book that many people look to when trying to search for their purpose. All four disciples were present at the crucifixion of Christ; yet, each presents a different account to how the two thieves were treated in their final hours. This parable shows that each person holds a different view and the basis of salvation is based on chance.

“Waiting for Godot” symbolizes the forces that allow people to continue to seek for answers regarding the purpose of human existence.

Throughout their quest, people are confronted with the forces of hope, chaos and chance that gives them the strength to carry on. Beckett shows the hopelessness that is present in the lives of Vladimir and Estragon in the way they struggle to pass time. The phrase “nothing to be done” is a recurring thought that adds to this hopelessness because they are tied to Godot, who symbolizes salvation. Their daily struggles contain no orderly sequence or memory of any past events that allows the chaos in their lives to encourage them to hope that Godot will come. To Vladimir and Estragon, their lives contain no purpose except to wait for Godot, therefore, their lives are meaningless. The worthlessness of their lives combined with the reality that life is based on chance, allows their lives to put in the hands of fate. These two characters have the hope that they will eventually be saved which lets them continue their journey in the search for answers even after many people would have lost faith.