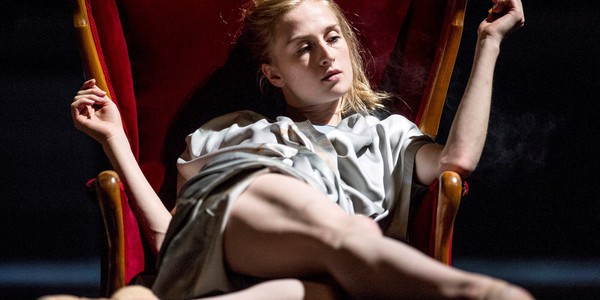 Hedda Gabler faces an impasse in her life.

Sharing Nora’s craving for freedom and Mrs. Alving’s compliance with social conventions, Hedda finds no outlet for her personal demands; she is constantly torn between her aimless desire for freedom and her commitment to standards of social appearance. Refusing to submit to her womanly destiny, Hedda has such an unsatisfied craving for life that she is incapable of being emotionally involved with others.

When Nora Helmer recognized her own unsatisfied needs, she left her husband and children. Considering her most

was to find herself, she left home to discover her personal worth through facing life’s experiences before being able to relate to others. Like Nora, Hedda Gabler is a stranger to herself. However, lacking Nora’s daring and defiance of conventions, she is unable to undergo the trials of self-evaluation and becomes a morbidly self-vindictive, destructive virago, capable only to strike out against the successful socially conforming individuals who represent an implicit reproach to her uninformed cravings. In the play, Ibsen provides enough information to show how Hedda’s problem is the product of her special background.

Raised by her military father, Hedda must have grown up in an atmosphere of strict discipline and conformity to rules. Becoming a beautiful sought-after young woman, she attended many social affairs but never found anyone to marry; probably she was not rich enough to interest the eligible bachelors of high social standing.

As a product of the nineteenth century, when women were destined to become either respectable old maids like George’s aunts or humble housekeepers like Mrs. Elvsted, Hedda is an anomaly. Instead of preparing his daughter for wifehood or motherhood,

General Gabler taught her to ride and shoot, skills symbolic of the military mystique which became for Hedda the basis of her fascination with the violent and the romantic.

Inheriting from her father, whose forbidding portrait hangs in the Tesman’s drawing room, his pride and coldness as well as his imperious commanding attitude toward others of a lower rank, Hedda lacks compassion for weak and submissive creatures like Thea and Aunt Julia but has a respect for power and independence, qualities she finds in Brack and Lövborg.

Since it was unthinkable at the time for a woman to receive either an intellectual or a professional education, Hedda’s intelligence remained stultified. Unable to recognize the demands of her individuality, she remains enslaved to a standard of social conventionality and can only admire from afar the forbidden world where there is freedom of expression and an uninhibited exuberance of life. Eilert Lövborg provides Hedda with the vicarious experience of an individual who enjoys an unfettered creative life. She drew sustenance from his soul’s outpourings as he told her of his dreams, his work, and his excessive way of life. At the same time, Hedda was too ignorant and inexperienced to accurately evaluate Lövborg’s character; she regarded him not as a creature of reality, but as the person—and realization—of her adolescent quest for the romantic.

When Lövborg made serious demands on her, Hedda rejected him. Stultified at the emotional level of an adolescent and repelled by his unconventionality, she could no longer tolerate the intensity of an actual relationship and shrank from responding to his demands.

George Tesman, on the other hand, is an acceptable husband especially because he makes no demands on Hedda’s emotional incapacity. Posing no threat to her internal security, he is able to provide her with material security and to indulge her tastes for luxury and an active social life. Besides being sincerely fond of his bride, George satisfies Hedda’s conventional standards (he is “correctness itself”) and leaves her imagination free to indulge her demand for independence and courage.

Having thus married to inure herself from any internal threats, Hedda coldly plans to base her life on the enjoyment of external advantages. The drama begins at this point and develops characters and events which swiftly undermine Hedda’s system of values. Her pregnancy is the first disturbance to her calculated system of inner protection. Hedda then learns that George’s appointment may be deferred, a situation which deprives her of luxury and active social entertainment.

It is significant that Lövborg, Hedda’s romantic ideal of the free and life-intoxicated hero, becomes George’s professional rival. According to her conception, Eilert’s free spirit must have somehow been conquered, or she must have deceived herself as to his true nature. In either case,

Hedda is deprived of her favorite ideal and must try to reinstate the old Lövborg in order to maintain an equilibrium between fantasy and reality.

When she discovers that Thea Elvsted has preempted her former power over Eilert, now temperate, hard-working, and successful, she overrides Thea to gain the desired influence over Lövborg. This too backfires, for his liberation from Thea’s steadying influence becomes a sordid debauchery that ends with Eilert’s ignoble death. Thus, all Hedda’s expectations dissolve into a vulgar residue that she cannot accept.

Brack administers the final blow to her dream of independence when he threatens her with blackmail. After all her efforts at manipulating others so that she can remain free of fettering responsibilities and slavish domestic attachments, Hedda learns that she is forever at Brack’s

if she wishes to avoid being involved in a sordid scandal. With this final disillusion, Hedda no longer has a life worth facing. In a tragic attempt to

she puts a bullet through her temple.