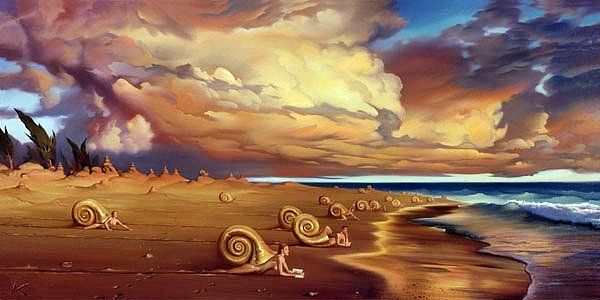 Poet who has deeply influenced American poetry since the 1970s is Ashbery – the best-known poet of the “New York School.” His work is characterized by originality, impressionistic elegance, and dark themes of death and terror as evidenced by his lines, ‘The locking into place is death’. In the 1950s Ashbery adopted to his poetry techniques used by such abstract painters as Willem Kooning and Jackson Pollock. In ‘The Painter’, we see surrealistic techniques employed. He also was interested in the music of John Cage and his poem, ‘Melodic Trains’ has been written in a musical-musing style. Charles Altieri calls Ashbery “the major poet of our minor age”. Ashbery himself commented in ‘The Invisible Avant-Garde’, that “Artists are no fun once they have been discovered”. The main purpose of Ashbery’s poetry as Ashbery himself asserted is:

The best example is ‘Melodic Trains’ which is based on stream of consciousness technique recording a real transcript of our minds. Elusiveness perhaps best describes Ashbery’s poetry. His poems are difficult reading for those weaned in the early 20th century poetry. Landscapes dominate Ashbery’s poems. His pictures are always laid against the backdrops of vast landscapes, as the train is against the photomural of the Alps in Melodic Trains. Ashbery often writes by assuming a persona i.e. a character who narrates the story but who is distinctly not the poet. As a result, we have many different personalities talking to us in his poetry and none of them can be attributed to the poet himself. We have a good example of this in the traveler in a tweed coat holding a briar pipe in Melodic Trains who may be Ashbery but he is soon lost in a multitude. By assuming this persona, Ashbery is able to bring in all the social voices he needs to paint the landscape of experience in American society. It is very difficult to categorize either Ashbery himself or his poems. Though Ashbery is a 20th Century Post-modernist yet we find so much diversity in respect of his technique and subject-matter that at one end, he seems classic like Elizabethans and yet at another, he seems much like romanticists such as Wordsworth and Coleridge. But I think he is best reserved for his avant-garde approach as asserted in the following lines from ‘The Painter’:

“How could he explain to them his prayer/ That nature, not art, might usurp the canvas?”

Another technique used by Ashbery is to echo other poets, to borrow their style to draw an ironical relation between their and his point of view. He has been known to echo Stevens, Eliot and Pound. As David Perkins points out, “for both Stevens and Ashbery the imagination creates, destroys and immediately creates another vision of reality”. We see this in ‘The Painter’ where the version of reality of the sea cannot be conveyed in paints and the artist needs a different medium to do that while his concern is that nature and not art might usurp the canvas. Sometimes Ashbery uses voices of other poets. David Perkins points out, “he adopts a style in order to invoke the tone of feeling associated with it and exhibits voices of different types of people”. ‘The Painter’ thus seems to be a direct echo from Browning’s many poems on the subject of art. We have echoes here of ‘Fra Lippo Lippi’ when the protagonist was criticized for finding his subjects in real life and was asked to make his portraits reflect the soul and not the body. In Melodic Trains the journey exists in the poet’s mind and he mingles humour with pathos, resignation with hope, and maintains his relaxed, and wonderful speech despite premises that might have led to despair. The anguish of the passengers of the train is shared by the poet but their anxiety and “dogged impatience” lead the poet to say:

“These figures leaving/The platform or waiting to board the train are my brothers….”

Ashbery’s poetry brings us to strange metaphors and shifts. The clouds of smoke in Melodic Trains are ‘wearying and world weary’ and look like ‘great white apples’. The tweed coat with its pattern is likened to ‘date-coloured Sierras’ while the lines of seams plunge into ‘unfathomable Valleys’. The figures may not always be this difficult as the anxiety-laden passengers on the platform look like Tower of Pisa figures though their ‘dogged impatience’ makes them look like determined birds ‘banking forward into the wind’. In The Painter, the artist chooses his wife as a subject and makes her “vast like ruined buildings”. Music is another quality of Ashbery’s poetry. The optimistic tone of his poetry makes even trains to be melodic. Melodic Trains describes the anxiety of the journey in musical notes which end at a fanfare of celebration with music of human voices. Finally, John Ashbery is a modern poet who addresses the sensibility of the modern man. Themes like music, rebellion, art, consciousness and the habit of wrapping lines into paragraph-like stanza (which penetrate deeper into anxieties and false beliefs) is his typical quality. He is a craftsman like classicists and imaginative like romanticists and is renowned for his simple colloquial diction. His metaphors are sometimes highly metaphysical and his poetry has a natural flow, varying in sound and effect according to the theme. All these make Ashbery a post-modern poet.