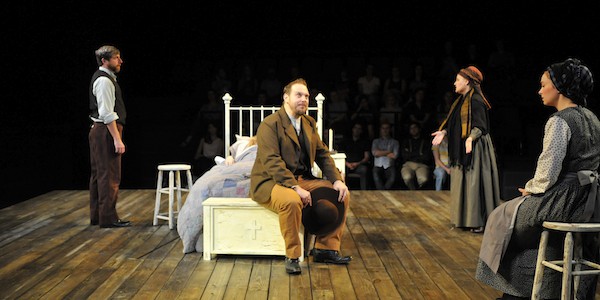 No person can completely steer clear of the trials and tribulations of his or her society. He who does may be vulnerable to serious allegations. If a man is to work well in his surroundings, he must partake in all aspects of his society or he is leaving himself open to unfavorable charges. In Arthur Miller’s, The Crucible, John Proctor’s lack of involvement in the Salem witch trials ultimately leads to his execution. John Proctor tries to avoid any involvement in the Salem witch trials. His reason for this attempt is motivated by his past fault of committing adultery with Abigail Williams. The guilt connected with his lechery makes Proctor hesitant to speak openly because he would condemn himself as an adulterer. Basically, then, in the first act he attempts to isolate himself from the primary proceedings, saying to Reverend Hale:

“I’ve heard you to be a sensible man, Mr. Hale. I hope you’ll leave some of it in Salem”

Proctor tries to wash his hands of the entire affair, than to instead deal with his own personal problems. His wife Elizabeth constantly badgers him about his adulterous affair and he retorts with

“Let you look sometimes for the goodness in me, and judge me not”.

Rather than interfering in the witch trials he is still trying to defend himself in the dangerous love triangle. In Act I, Proctor attempts to retire to the private world of his farm and remain completely oblivious to the events arising in Salem. This refusal to become involved is brought to an end when his servant, Mary Warren, announces that she is an official of the court and that Elizabeth Proctor has been

by the woman who with whom he had copulated. Proctor still wishes to dismiss the hearings, but his wife uses his guilt about infidelity to extract a covenant that he will expose Abigail as being an impostor. Proctor is being coerced by his wife to become involved, it is not his free and open decision. Indirect characterization can be surmised in the aforesaid situation that Elizabeth is very influential upon Proctor’s character. Harold Bloom avers that this demonstrates that

“Proctor’s sense of guilt is central to any understanding of him as a dramatic character”.

Before Proctor is forced to take the next step, Reverend Hale arrives and then, Herrick with a warrant for Elizabeth’s arrest. In anger over his wife’s conviction and arrest, Proctor accuses Hale of being a “Pontius Pilate” and later tells him that he is a coward by saying:

“though you be ordained in God’s own tears, you are a coward now!”

The significant self-laceration which John Proctor undergoes while struggling to make his choice is finally convincing because it is perfectly in character, Harold Bloom says: “Miller uses Proctor as a vehicle for the play’s major moral questions”. Proctor is weak, like most men, but he has the potential for greatness likewise common to all men. When John Proctor shouted: ‘’I am no saint”. He asserted his human frailty and vulnerability. As the tragic hero of Miller’s drama, Proctor faces his downfall due to his lack of commitment to humanity. Proctor feels guilty about his relationship with Abigail when he is visited by Hale and asked about his commitment to the church and his knowledge of the ten commandments. Proctor inadvertently forgets one commandment: “Thou shalt not commit adultery”. Proctor accounts for his lack of attendance at church in Act 1 by proclaiming that he will not listen to the “hellfire and bloody damnation”, preached by Parris. In Act 2 he states:

“I like it not that Mr Parris should lay his hand upon my baby, I see no light of God in that man”

An act the towns people and the court view as a revolt against the supremacy of God. This quote also highlights Proctors’ otherwise principled approval to his life, he is not prepared to do something just because it is expected by the rest of the community. Proctor’s relationship with other characters highlight aspects of his personality. In Act 2 Giles Corey and Francis Nurse come to him for help following the arrest of Rebecca Nurse and Martha Corey. It is apparent from this that he is respected by them. Proctor’s character is also highlighted through how he is seen by his wife. Elizabeth is cooking for him and it is clear that she is wanting to please him. This shows that Proctor is obviously making an effort to please and be loving towards Elizabeth, but she is finding it hard to forgive him for his behaviour. “Spare me! You forget nothin’ and forgive nothin’. Learn charity woman. I have gone tiptoe in this house all seven month since she is gone. I have not moved from there to there without think to please you, and still an ever-lasting funeral marches round your heart”.

It is important to Proctor how he is seen by other people in the community and for this reason he is reluctant to go to Salem’s court early on, as he would have to admit to the affair with Abigail. He eventually acts correctly, in order to show his love for Elizabeth who risks condemnation from the court on evidence from Abigail. The outraged court officials summon Elizabeth Proctor to find out the truth about Proctor and Abigail. When asked about her husband, Elizabeth’s soul is twisted, for reporting the truth could destroy her husband’s reputation, but lying means breaking the solemn oath to God. As she is selfless, Elizabeth choose to lie and save her husband, but perhaps condemn herself to hell for such a sin. This scene indicates dramatic irony, for Proctor knows that which Elizabeth is not aware of, and this is that he has already “confessed it”.

In Act 3, Proctor remains loyal to his friends who;s wives have been accused . He is tempted to withdraw his charges against Abigail when he is told his wife is pregnant and in no immediate danger of being hung, but he goes ahead to support his friends. Despite Proctor’s lack of integrity in his relationship with Abigail, Proctor is initially tempted to save his own life by confessing, but he eventually decides to die rather than lose his good name, Proctor’s recognition is his discovery that he contains goodness.

“for now I do think I see some shred of goodness in me”.