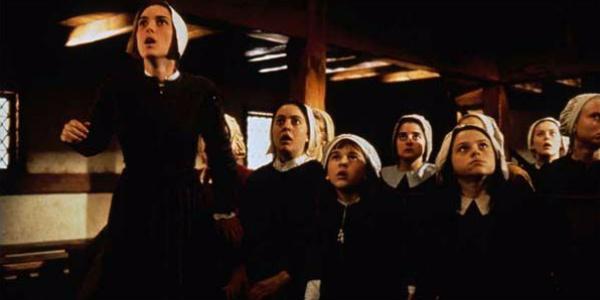 John Proctor is a character from the Crucible, a
play by Arthur Miller, Throughout the play he changes from being a troubled,
self-exiled, sinner to becoming a person of high moral standards. The
characters in this play are simple, common people that live in the town of
Salem in the year 1692. There is a rumor of witchcraft floating about in the
town that has led to accusations about many of the townsfolk. The accused are
charged and convicted of a crime that is impossible to prove (witchcraft). The
reasons the villains select the people they do for condemnation are both simple
and clear because all of the accusers have ulterior motives, such as revenge,
greed, and covering up their own behavior. The three major points I will be
talking about in my essay about are as follows: 1 His entrance into the play
where he is talking alone to Abigail and trying to convince himself that he is
not an adulterer and that they did not have an affair. 2 when John is reciting
the Ten Commandments. 3 where John tells Elizabeth that he are going to
confess.


In the beginning of the play John Proctor is introduced as a farmer in his mid
thirties, that is not a partisan of the town, and shows a very strong sense of
self-preservation. The first real conversation he has with another character is
with Abigail Williams, where Abigail is trying to make John tell her that loves
her, and that he will come again for her. John tells Abby that their affair is
over with and Abby begins to plead for John’s love and he says

“Abby I may
think softly of you from time to time. But I’ll cut off my hand before I’ll
ever reach for you again. Wipe it out of mind. We never touched, Abby.”

John
knows that he really did have an affair with Abby, but the fact that he denied
it shows how in the beginning of the story, he was a man only concerned with
only his own self preservation. Despite his adulterous behavior John Procter is
a man that often serves as the only voice of reason during the play.

In act two, in the scene where Reverend Hale asked
John to recite the Ten Commandments, and John recited all except for adultery.
This scene shows that John isn’t just pretending he didn’t commit a sin, but
that in his mind the sin of adultery doesn’t exist by itself, it had to be
triggered by Elizabeth telling John that he forgot, adultery as one of the
commandments. It is from this point on that John Proctor seems more willing to
accept the consequences of his behavior.

“I will fall like an ocean on that
court! Fear nothing Elizabeth.”

Now John has a purpose for direct involvement
in the trials, it is the fact that Elizabeth has now been accused of
witchcraft. Since John knows she is innocent his statement above shows his will
to make sure his wife’s image or life isn’t destroyed by the false accusations
of Abigail.

“A man will not cast away his good name. You surely know that.”

This quote
shows how in the middle of the story John fells that his name is the only true
thing a man has. This quote comes from the courthouse scene where John tells
the judge that the girls danced naked in the woods. After Abigail’s dramatic
reaction, John tells the court that he had an affair with Abby, and that she is
a whore not to be trusted. At this point John asks that the court see it is
only Abigail’s vengeance that Elizabeth is guilty of.


In the final act John Proctor decides to confess to the crime.

“I have been
thinking I would confess to them, Elizabeth. What say you? If I give them that?
It is at this point that John realizes that his name is no longer as important
as he once thought. “…let them that never lied keep their souls. It is pretense
for me, a vanity that will not blind God nor Keep my children out of the wind…”

But the good name of honest people like Rebecca Nurse still has a profound
importance, and John feels that importance. Now John has a burning desire to
live and is ready to confess, but just as he signs the confession he snatches
it up and rips it in half, because he doesn’t want his name to be scorned in
the village. It appears as though John Proctor has come full circle and now
refuses to hand the confession over to Danforth.

“Because it is my name!
Because I cannot have another in my life! Because I lie and sign myself to
lies! Because I am not worth the dust on the feet of them that hang! How may I
live without my name? I have given you my soul; leave me my name!”

He realizes
that the only thing in this world that he can hang on to is his name, his
honor, and the truth. John Proctor’s story is the heart of the play. He
represents both the cowardice and courage that Miller sees in everyone in the
play, and in the world, caught in dangers beyond their control. His initial
reaction is to protect himself only. With time he believes that he needs to
protect others, not only himself. But in the end he comes to realize that all
he can do and must do is to protect the truth, even at the cost of his own
life. By doing so he finally saves his own ‘name’, his truth, and his life, in
a different way. This is what Miller is trying to tell us, that there are some
things more important than life itself.