The pie chart below shows the main reasons why agricultural land becomes less productive. The table shows how these causes affected three regions of the world during the 1990s. 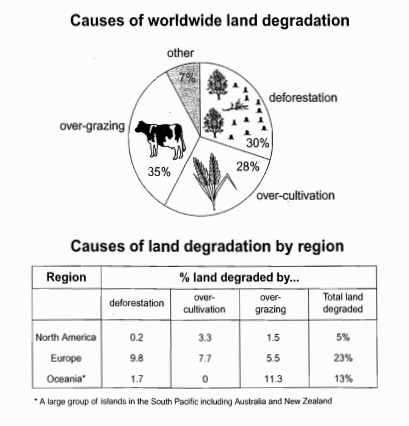 ANSWER
The pie graph displays the principal causes why farming land deteriorates while the table illustrates how three regions of the planet were affected by these factors in the 1990s.

We can clearly see from the pie chart that there are three primary causes of farmland degradation, and over-grazing is the major one. The table shows that Europe had a far higher percentage of unproductive land compared to the other two regions in this time period.

The pie chart represents four causes, with over-grazing representing the biggest proportion at just over a third. Widespread clearing of trees and the over-use of crops constitute nearly one third and just over a quarter respectively.

The table shows that nearly one quarter of Europe’s entire surface had fall victim to degeneration. Only a small proportion of North America’s total land became less productive at 5% and Oce ania was marginally higher with a value of 13%.