The map below is of the town of Garlsdon. A new supermarket (S) is planned for the town. The map shows two possible sites for the supermarket. 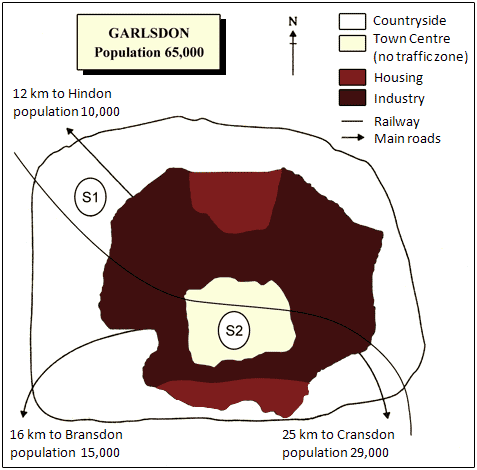 ANSWER
The city centre and the countryside are the two potential locations for the construction of a new supermarket for Garlsdon.

Initially, the S2 location in the city centre seems attractive as it is centred between Bransdon (16km to the west) and Cransdon (25km to the east). The former has a population of 15,000 while the latter has 29,000 which would increase shopping traffic to the town of Garlsdon which has an existing population of 65,000. However, on closer inspection we can see that the town centre is a no traffic zone and the railway shoots past it.

S1 is situated in the northwest and is sandwiched between the main road and the railway. Hindon which is located 12km away from this point has a population of 10,000. The site of this supermarket is on the outskirts of the town, in the countryside.

Before deciding which option to go for, the municipality should weigh its choices. If it builds in the town centre, shoppers will have difficulties with parking and transportation there as it is a no traffic zone. On the other hand, building on the outskirts may deter shoppers who don’t want to trek out that fa.