NeoTips for writing pie chart
You need to write and introduction with an overview and then create a body of the writing with details showing different patterns in similar and different groups.

You should spend about 20 minutes on this task.

The pie charts show the main reasons for migration to and from the UK in 2007.

Summarize the information by selecting and reporting the main features and make comparisons where relevant.
Write at least 150 words. 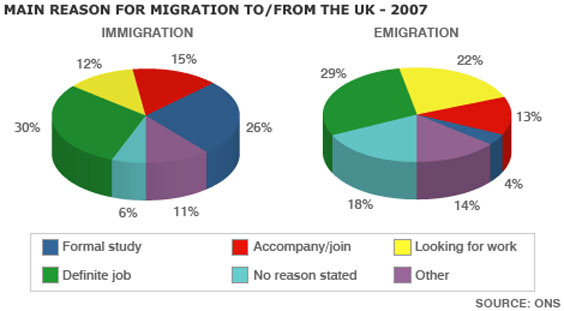 The pie charts illustrate the primary reasons that people came to and left the UK in 2007. At first glance it is clear that the main factor influencing this decision was employment.

Having a definite job accounted for 30 per cent of immigration to the UK, and this figure was very similar for emigration, at 29%. A large number of people, 22%, also emigrated because they were looking for a job, though the proportion of people entering the UK for this purpose was noticeably lower at less than a fifth.

Another major factor influencing a move to the UK was for formal study, with over a quarter of people immigrating for this reason. However, interestingly, only a small minority, 4%, left for this.

The proportions of those moving to join a family member were quite similar for immigration and emigration, at 15% and 13% respectively. Although a significant number of people (32%) gave ‘other’ reasons or did not give a reason why they emigrated, this accounted for only 17% with regards to immigration.