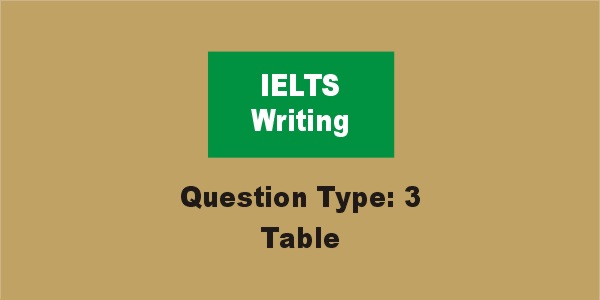 NeoTips for writing tables
You need to write and introduction with an overview and then create a body of the writing with details showing different patterns in similar and different groups.

Task 1: Table
You should spend about 20 minutes on this task.

The following table gives statistics showing the aspects of quality of life in five countries.

Write a report for a university lecturer describing the information in the table below. You should write at least 150 words.

The table uses four economic indicators to show the standard of living in five selected countries in 1982. Overall, it can be seen that the quality of life in the USA was far higher than the other four countries.

To begin, the USA, which is a developed country, had the highest GNP at 13,160 dollars per head. It also had a much higher daily calorie intake and life expectancy, and the lowest rate of infant mortality.

The other developing countries had quality of life ratings that were significantly lower. The range of indicators for Egypt, Indonesia and Bolivia were similar, with Egypt having the highest quality of life amongst the three. However, the infant mortality rate in Egypt’s was slightly higher than Indonesia’s at 97 deaths per 1000 compared to 78 in Indonesia.

Bangladesh had by far the lowest quality of life in all the indicators. Its GNP was one hundred times smaller than the USA’s. Its calorie intake and life expectancy were about half those of the USA, and its infant mortality rate was 10 times greater.
Words 178