Skip to content
NeoTips for writing line graphs
You need to write and introduction with an overview and then create a body of the writing with details showing different patterns in similar and different groups.

The bar chart shows the number of times per week (in 1000s), over five weeks, that three computer packages were downloaded from the internet.

Summarize the information by selecting and reporting the main features and make comparisons where relevant. 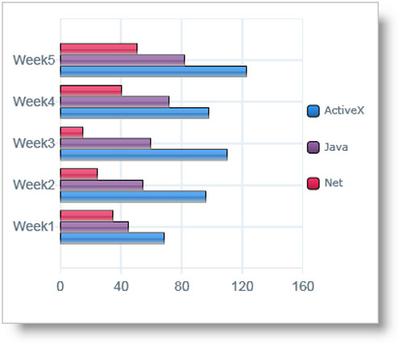 The bar chart illustrates the download rate per week of ActiveX, Java and Net computer packages over a period of five weeks. It can clearly be seen that ActiveX was the most popular computer package to download, whilst Net was the least popular of the three.

To begin, ActiveX and Java showed a similar trend, with both gradually increasing from week 1 to week 5. However, the purchases of Active X remained significantly higher than for the other product over this time frame. In week 1, purchases of ActiveX stood at around 75,000, while those for Java were about 30,000 lower. With the exception of a slight fall in week 4, downloading of ActiveX kept rising until it reached a peak in the final week of just over 120,000. Java also increased at a steady rate, finishing the period at 80,000.

The product that was downloaded the least was Net. This began at slightly under 40,000, and, in contrast to the other two products, fell over the next two weeks to a low of approximately 25,000. It then increased sharply over the following two weeks to finish at about 50,000, which was well below that of ActiveX.