Skip to content
NeoTips for writing line graphs
You need to write and introduction with an overview and then create a body of the writing with details showing different patterns in similar and different groups.

Task 1: Linegraph
You should spend about 20 minutes on this task.

The line graph below shows changes in the amount and type of fast food consumed by Australian teenagers from 1975 to 2000.

Summarize the information by selecting and reporting the main features and make comparisons where relevant. 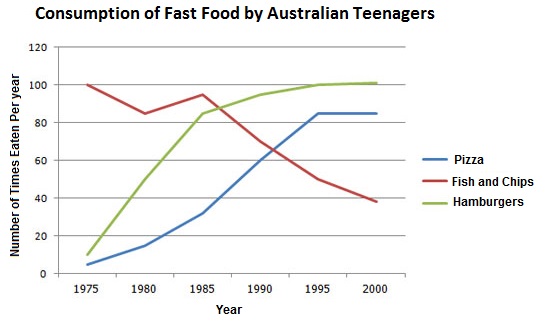 Answer:
The line graph illustrates the amount of fast food consumed by teenagers in Australia between 1975 and 2000, a period of 25 years. Overall, the consumption of fish and chips declined over the period, whereas the amount of pizza and hamburgers that were eaten increased.

In 1975, the most popular fast food with Australian teenagers was fish and chips, being eaten 100 times a year. This was far higher than pizza and hamburgers, which were consumed approximately 5 times a year. However, apart from a brief rise again from 1980 to 1985, the consumption of fish and chips gradually declined over the 25 year timescale to finish at just under 40 times per year.

In sharp contrast to this, teenagers ate the other two fast foods at much higher levels. Pizza consumption increased gradually until it overtook the consumption of fish and chips in 1990. It then leveled off from 1995 to 2000. The biggest rise was seen in hamburgers, increasing sharply throughout the 1970’s and 1980’s, exceeding fish and chips consumption in 1985. It finished at the same level that fish and chips began, with consumption at 100 times a year.