You should write at least 150 words. 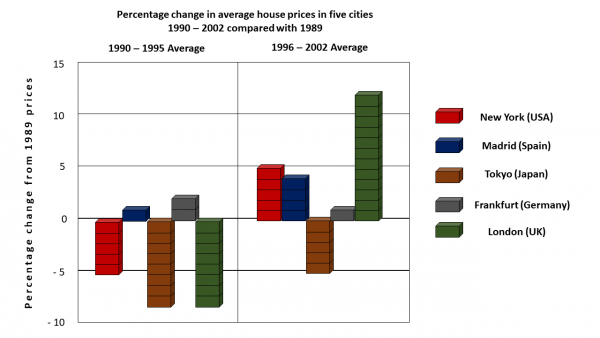 As can be clearly seen, there was a considerable fall by approximately 5% in the proportion change of estate prices in New York between 1990 and 1995. Likewise, Tokyo and London, which had the same figures, witnessed a dramatic decrease by about 7% over the same period. However, the figures for Madrid and Frankfurt were around 2% and 3%, respectively.

During the latter period from 1996 to 2002, the figure for London was the highest with more than 10% in the percentage of change of house prices. During the same period, the rates at which the house prices increased were about 5% in New York and 4% in Madrid. This rate in Frankfurt was 2%, lower than in the first 5-year period. Finally, the percentage change in Tokyo fell by around 5% between 1996 and 2002.