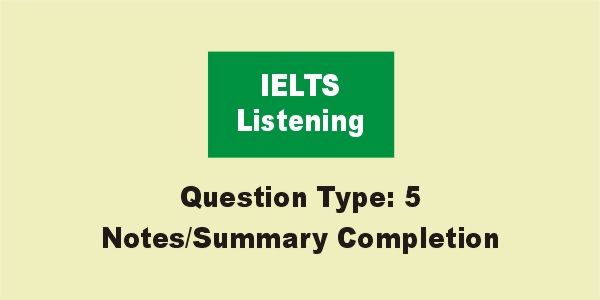 NeoTips for Notes and Summary Completion
Don’t leave any answer blank, make a guess. there’s no negative marking. Write the word as you hear, don’t change the word.

Complete the sentences below.

Write NO MORE THAN THREE WORDS AND/OR A NUMBER for each answer.

Complete the summary below.

Write NO MORE THAN TWO WORDS for each answer.

In preparation for the second experiment, pupils should understand the fundamental ideas of frequency and 6 ______________.. This can be done using water as an analogy. Pupils then hit a tuning fork near the end of a 7 ______________.immersed in a barrel of water. At some point, the sound 8 ______________.due to the resonance of the wave. This means there are a whole number of waves and pupils measure the length of the column of air.

Answer the questions below. Write NO MORE THAN THREE WORDS for each answer.

9 What should pupils do with their results to increase the accuracy of the experiment?

Josie: Hi, Al. Sorry to interrupt you when you’re having your lunch, but I wanted to ask you a favour.
Al: Oh, sure. No problem. Sit down, Josie. I’ve finished anyway. What do you need?
Josie: Well, I was wondering if I could ask you about the experiments we were talking about in the seminar the other day with Dr Robinson. I’m doing my teaching practice on Thursday and Friday and I’m a bit concerned about it. I wasn’t entirely sure I understood them completely. If I don’t understand them, then the pupils don’t have any chance!
Al: You mean the ones to determine the speed of sound?
Josie: Yes, that’s right. Well, I think I understood the first one, but the second one was more complicated.
Al: Yes, that’s true. Well, let’s check what you thought of the first one, the one that you’ll have to take the kids outside for.
Josie: Okay. Let me see. Well, you need to get two groups to stand exactly 200 meters apart on the playing fields, and one has a bell or a loudspeaker or some other loud sound Source and a flag and the
other group has a stopwatch.
Al: Yes, although it doesn’t have to be 200 meters. It’s just that it makes the experiment easier the more distance between them. It depends on the space available.

…………….
Josie: Right. And the idea is that one group raises the flag at exactly the same moment as they make a noise and the other group starts the stopwatch when they see the flag and stops it when they hear the noise.
Al: That’s it.
Josie: And then you get them to do a simple calculation of velocity equals time divided by distance.
Al: Yeah. It’s a bit low-tech, and it’s not very accurate, but they should be able to get within about twenty per cent of the actual figure if they’re reasonably careful.
————————————
Josie: Okay, so I understand that. It’s the other one, the one with the tube I was having a few problems with. Can you just talk me through that and tell me exactly what I have to explain to the pupils?
Al: Okay. Well, the thing to remember is that sound is a wave and waves have both frequency and wavelength. You should start them off with exploring waves in water and that’ll introduce a
few key concepts. Sound waves aren’t exactly the same, because they’re compression waves, but it’s more or less the same principle,  at least for pupils at this level.

Josie: I’ve got some ideas for that. So, they understand wavelength and frequency, and then we move on to the experiment. For that  we need …er…let me just have a look at my notes…a long tube, a
tuning fork and a large barrel of water. Now, what do they do with those, and what’s the point of it?
Al: It’s fairly simple, really. You just have to remember that velocity equals wavelength times frequency.
Josie: Ah, yes. That’s the key, isn’t it?
Al: Yes. The tuning fork is manufactured to produce a sound of  a given frequency, so that just leaves you one thing to measure.  The pupils hit the tuning fork so that it makes a sound and hold it towards the end of the long open tube. That makes the air vibrate.  They should slowly move the tube up and down. They’ll find that in  some positions it gets louder. That’s because of resonance.
Josie: What’s that again?
Al: It’s when there are a whole number of waves in the column of air in the tube. It makes it louder. They then measure the length of  the column of air and they can work out the wavelength from that.
Josie: And that’s more accurate than the other experiment?
Al: Well, it is if the pupils take an average using different tuning forks. It should be much more accurate.
Josie: Thanks, Al. That’s clear to me now. I can’t think of any more problems…
Al. Just make sure that the pupils keep good records. You need to tell them how important that is. Any mistakes with the maths can be corrected later, but you don’t want them to have to go back
and get the data again. You probably wouldn’t have time for that, anyway.
Josie: Good advice. Yes. I just hope it goes well in the classroom now.