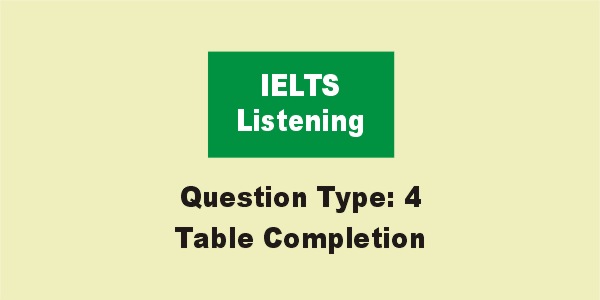 NeoTips for Short Questions
When you do table, the answers are in the same order as in the recording. In table, you do not need to worry about articles and plurals i.e. “A book, book or the book” are all correct answers in tables.

Complete the table below.

Write NO MORE THAN THREE WORDS AND/OR A NUMBER for each answer.

CFCs (chlorofluorocarbons) and the Ozone Layer 1 ____

Which of the notes are true of these scientific items?

Choose your answers from the box and write the letters A-F next to questions 8-10.

Listening Script
Today, it is well known that CFCs, or chlorofluorocarbons, can do immense damage to the Ozone Layer, which protects the Earth from harmful radiation from the Sun. However, it was as recently as the mid-1970s when the connection between CFCs and Ozone Layer destruction was first established. The story starts back in 1957, when James Lovelock invented the Electron Capture Detector. This is a machine that can detect very small amounts of a chemical compound in the atmosphere. Indeed, using the machine, it was Lovelock who was the first person to detect the widespread presence of CFCs in the Earth’s atmosphere. In 1973, Lovelock, on a research trip which he’d funded himself, measured the amount of CFCs in the atmosphere in the Arctic and in Antarctica, but unfortunately came to the wrong conclusion that CFCs are not harmful to the environment. Following on from this work, though, in 1 974, Sherry Rowland and Mario Molina published the very first scientific paper on the connection between CFCs and Ozone Depletion. This quickly prompted the world’s first ban on the use of CFCs, which was enacted in 1975 by the US state of Oregon. Further bans followed. In 1978, the United States and several European countries banned the use of CFCs in spray-cans.

CFCs were still allowed to be used, though, for refrigeration and in solvents. It was in the mid-1980s that scientists in Antarctica observed a huge depletion in the Ozone Layer above them, often called the ‘hole’ in the ozone layer. This led, in 1987, to the signing of the Montreal Protocol, which called for further reductions in the production and use of CFCs and then, two years later, to a European Union agreement to ban the production of all CFCs by the end of the century.
———————————-
So why exactly are CFCs so harmful? One of the reasons CFCs were so popular in the production of solvents and refrigeration coolants is that they are unreactive. That is, they don’t react easily or at all
with other chemical compounds. It’s this property, however, that also makes them dangerous. Because they are unreactive, it’s very difficult for them to be broken down. This gives them a long
lifespan  more than 100 years in some cases  and allows them to rise into the upper levels of the atmosphere  the stratosphere – unchanged. There, ultraviolet radiation from the sun starts to
break them down freeing the chlorine atoms from the CFCs. It’s this chlorine that helps destroy the ozone there.