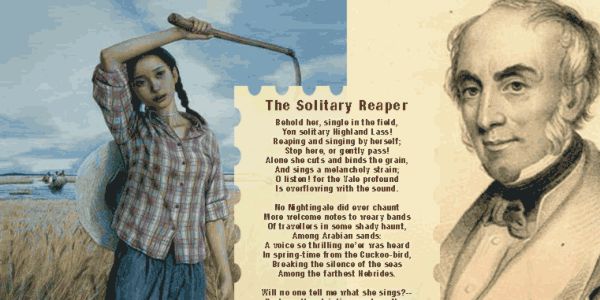 “The Solitary Reaper” is the result of Wordsworth’s visit to Scotland where he came across a lovely maiden singing whose sweet song had a deep impression on the poet and moved him into this poem.

The lovely singer appeared to be a part of nature.

The title is well-focused on the theme of the poem. The whole poem is about the solitary reaper; who was reaping and singing at the same time. The poet is not able to understand the theme of the girl’s song as it was in a foreign language. He guessed that it was the tale of old and tragic events. It could be an account of some recent calamity. Whatever the theme, it was sung in a beautiful, rich voice. The poet was bewitched by the thrilling notes of the reaper.

The whole valley was overflowing with her silvery sound.

Even Cuckoo could not produce such a magical effect on the poet as the reaper did. Afterwards, when the poet was off the hill, he could not hear but he was still feeling the sweet vibrations of the music in his heart. The sweet memory of the song had become a permanent source of joy. The title leads us to this theme that we should embrace sweet memories in our heart so that we can recall them in trouble and enjoy the same pleasant warmth. Sweet memories should be preserved because Keats says,

‘A thing of beauty is a joy for ever”.