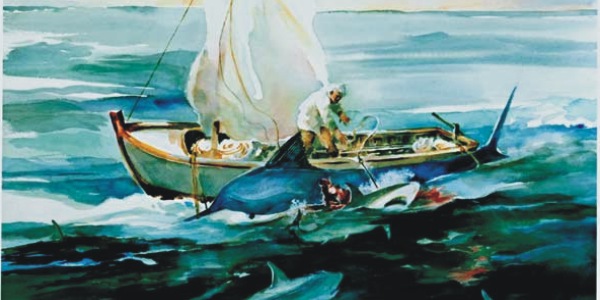 The old man feels truly elated after he had killed the biggest marlin hunted by any fisherman in that area. He is sure that even great Di Magio would be proud of him that day. He lashes the fish alongside his boat and sail southwest, unaware of the blackest tragedy that awaits him.

Hardly an hour passes when, attracted by the scent, the first shark, a Mako, hits him. It is armed with teeth sharper than the edge of the sword; it is the worst enemy that could be imagined on the sea. The unconquerable man runs the harpoon into the head of the shark. He hits it

“with resolution and complete malignancy.”

It turns over and sinks in water. The old man is deeply grieved to think that his fish has been mutilated. It seems to him

“as though he himself were hit.”

This however, is the beginning not the end. The scent of the fish spreads far and wide attracting entire shoals of sharks from the deep. The old man is now pitted against not one but legions. He wishes

“it had been a dream”

but then he reminds himself

“man is not made for defeat. A man can be destroyed but not defeated.”

He kills them one after the other, first with the harpoon, then with the oar with the knife lashed to it, then with his club and lastly with his tiller. He gives a brave fight and makes short work of several sharks but they are too many: but that cannot dampen his courage. However, it does not mean that he is a superman or a giant. He has the common weaknesses, which become all the more prominent when he is pitted against forces much stronger than he.

After he hooks the fish, he wishes a successful end of this adventure. Without compromising on his skill or in any way relaxing his efforts, he promises scores of

“Hail Mary’s and Our Fathers.”

Perhaps he does this to keep up his heart. However, his anxiety culminates into a delirium. When the sharks hit him, he cannot help calling out helplessly,

“I’d like to buy some luck if there’s any place they sell it.”

He then accuses himself of violating his luck by going

Nevertheless towards the end of the novel, he emerges a living martyr, reconciled to the fortune and ready to make new start.