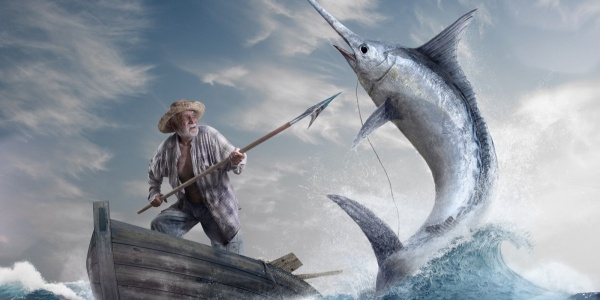 Santiago is an old man who has endured many ordeals, whose best days are behind him, whose wife has died, and who never had children. For 84 days, he has gone without catching the fish upon which his existence and his sense of identity depend. Santiago is a multifaceted personality like Hemingway himself. Santiago is a central figure. The novel starts and ends with him. Santiago is physically weak with his hands having deep creases from handling great fish. However,

his eyes are the same color as the sea signifying optimism and vision.

Santiago is a devoted angler. He stands apart from Cuba’s fishing culture converting to a fishing industry. He remains dedicated to a profession he sees as a more spiritual way of life. Santiago is compassionate; but not religious. He loves the boy, the fish, the sea creatures; but he prays only in the time of trouble. He remains alone throughout his life. The old man is superstitious to some extent; but still believes more in his skill than luck.

What Santiago desperately wants is one epic catch—not just to survive, but also to prove once more his skill and his identity as an angler so that Manolin will forever honor his memory.

For Santiago, what matters most in life is to live with nobility, struggle and endurance and to accept inevitable destruction with grace. He wants to pass on to the next generation the value that he has gained.

Santiago is a great lover of baseball and enjoys constant inspiration of DiMaggio. Santiago was once hand fight champion and had beaten a Negro. However,

what makes Santiago special is that despite a lifetime of hardships that has hurt him; he is still a man in charge and an expert who knows the tricks of his fisherman’s craft.

His eyes remain young, cheerful, and undefeated. He knows how to rely on the inspiration and confidence to keep alive in him and others the hope, dreams, faith, and resolution to transcend hardship.