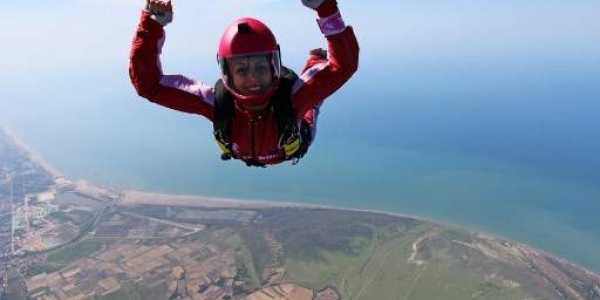 Gloria Emerson worked in a newspaper office. She wrote stories about women. There was no thrill in her stories. She wanted to have some adventure to write about. She wanted to perform something daring and write about it. The purpose was to surprise and impress others. Gloria Emerson shows that determination is the key to success. We can work miracles if we have confidence in ourselves.

“Take the plunge” is an inspiring story with the unusual courage of a woman who successfully plunged out of an airplane with parachute.

She thought of many things but nothing appealed to her. She had a bad back, and her ankles were uncertain. Her eyesight was weak. She could not drive properly for fear; people usually took pity on her. They thought that she was worthless. She disliked this attitude of the people. She decided to jump from an airplane. Her motive in making the jump was to impress the people. She wanted to end the impression that she could not do anything. She was fully determined to surprise her own colleagues at the newspaper office as well as the people at large. Jacques 1stel told her that parachuting was as safe as swimming.

Jumping from an airplane promised a great excitement.

She was driven to Boston where she was to perform. She was anxious to feel the rising of a small plane and taking the plunge in the open atmosphere. At last, she made up her mind to jump with a parachute. So when she jumped and landed. All were surprised and then pleased. Moreover, she gave a thrilling story to her newspaper readers. Her purpose of jump and writing a good story was fulfilled.