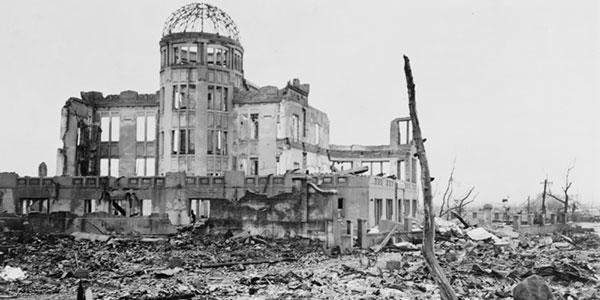 The essay is written as an attempt to point out the destruction of atomic weapons. The writer has narrated the scene of destruction, which happened after the atomic attack on Nagasaki by America. The writer himself witnessed it. He heard the voice of a plane and then the smoke and fire was everywhere. The details suggest that the bomb was very powerful.

When the bomb exploded, the air flashed a brilliant yellow and there was a huge blast of wind. The glasses of the building were shattered and the sky turned from blue to dark. The black rain started falling. Tall buildings were reduced to rubble. The air was full of high radiation. There were fires everywhere. Numerous people were seriously wounded. Their clothes were in rags, and shred of skin hung from their bodies. They looked like ghosts with vacant stares. There were dead bodies everywhere. All the leaves of the trees were lost. The green mountains changed to bald mountains.

A number of volunteers were running on the roads to take the people to the hospitals. Such was the scene of destruction in Nagasaki after the atomic attack. In fact, the writer has given the picture of this horrible attack to make the world realize the after effects of the use of atomic weapons. He seems to be giving a message to all of us that atomic energy may be useful in some ways but as far as a war is concerned

“never again should these terrible nuclear weapons be used, no matter what happens. Only when the mankind renounces the use of these nuclear weapons, will the souls of my friends rest in peace.”