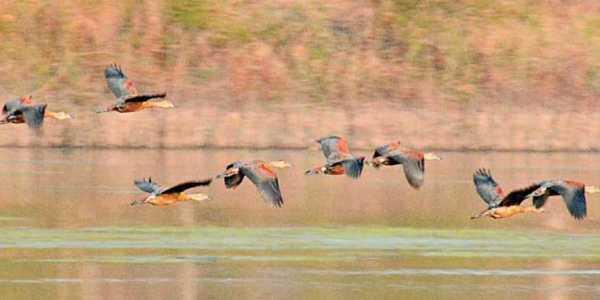 ‘Whistling of Birds’ is a very touching essay which moves our imagination. The writer has presented a contrast between Spring season and Winter season. Lawrence presents a contrast of the beauties of spring with the destruction of winter. He uses vivid images to show the disastrous effects of winter and paints a real picture of death.

The writer says that winter is the season of death. It has long and fearful hard frost. All colors disappear. Everything changes into whiteness. Water, lakes, pools and streams freeze and plants whither and die. The earth is strangled. Thousands of birds are killed by that intense cold. Everywhere

are seen. Birds die out and their remains in the bushes and ground cast the shadows of death. Death seems to hover all about but this lasts only for sometime then the change comes. Life is a continuous process; seasons also move in a cycle. If winter is death; spring is life. It is the arrival of spring which is the symbol of life.

little gleams of sunshine, new world transition, new regime and many other images are employed to present creative power of spring. He moralizes that every cloud has a silver lining. It is winter behaving like general who has been beaten now by the neutral force i.e. the Spring.

Lawrence reveals that life and death as incompatible. They cannot co-exist. Things beaten by winter start to recover and restore their life. Birds forget the remains of dead and whistle to welcome the new life. Trees bring forth leaves and greenery starts to rule. Frost melts away and rays of life emerge. Life is a process and the old must be replaced by the new. This is the law of nature. Death cannot rule forever, it must be beaten by Life which is to survive even in the Hereafter. Lawrence’s description of nature reveals his love as well as appreciation of different creatures.