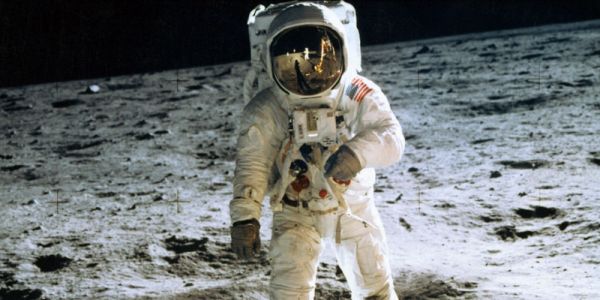 David R. Scot is one of the three American astronauts who visited the moon in the space ship “Endeavor” in July 1971. They stayed on the moon for three days. During his short stay, he became familiar with the deserted world of moon. He can easily recall his memorable visit but some times, he wonders if he has really walked on the moon because it was such a rare journey.

He has written this essay to tell us about his adventure of visiting the moon. He has used a number of metaphors to make this essay interesting and attractive. He tells us about the sights, experiences and weightlessness he observed there. He made this journey in the Apollo 15 and landed on the moon with his two fellows. They felt weightlessness as the gravity of the moon was sixteen times less than that of earth. They felt as they were walking on a trampoline. There were mountains on the surface of the moon. Stars were shining there. Then the sun rose with its full brightness and they came down the ladder on the surface of the moon.

There was no air, no water, no plants and no life except for brownish mountains and the beaches.

One day on the moon was equal to 50 hours on the earth. They walked on the moon with pride and honor as they were the first to touch that mystical soil.

At departure, Scot was rather upset about leaving the moon.

He felt the pain of separation when he thought that he would never be able to visit that bright planet again.

His sense of loss makes him sad. He does not regard moon as a strange and dull place. For him it is a familiar and friendly. He believes that man’s visit to moon is his first step to conquer the depths of space. These were the observations and feelings of Scott, which he shared with the readers so that they might also feel his enthusiasm.